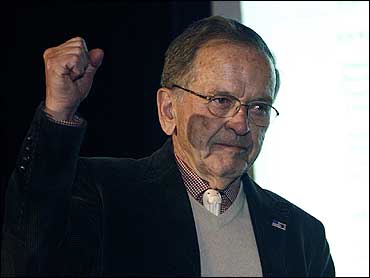 Sen. Ted Stevens, the Alaska Republican convicted of seven felony counts last month, faces a vote by his Republican colleagues next week on whether to kick him out of the Senate's GOP conference and strip him of plum committee assignments.

Sen. Jim DeMint, R-S.C., has served notice that he'll seek to expel Stevens from the GOP conference at a Nov. 18 meeting to elect party leaders for the session that begins in January.

Stevens is leading narrowly in his re-election bid but has not officially been declared the winner of a seventh full Senate term, but faces potential expulsion proceedings after being found guilty in federal court of seven counts of lying on his financial disclosure reports to conceal more than $250,000 in free home renovations and other gifts from a wealthy oil contractor.

Sen. Mitch McConnell of Kentucky, the GOP leader, has called on Stevens to resign and says he'll support expelling him if his convictions stand. But McConnell has also suggested it would be appropriate to permit Stevens to appeal his case before ousting him from the full Senate. Stevens has said he plans to appeal.

McConnell spokesman Don Stewart deferred comment, saying he had not discussed the issue with his boss.

Senators can only be expelled after the Ethics Committee investigates and recommends it. It takes a two-thirds tally, but most senators facing expulsion resign before a vote.

Removing Stevens from the GOP conference is a far lesser penalty than expelling him from the Senate. Stevens would still have full floor rights but would lose his slots on the Appropriations and Commerce committees next year, if re-elected.

Stevens already has been removed as top Republican on the Commerce panel and his ranking position on the powerful subcommittee responsible for the defense budget.

"Most of our leadership has called on Sen. Stevens to resign from the Senate. They should take the lead on removing him from the GOP conference as a convicted felon and taking away his committee assignments," DeMint spokesman Wesley Denton said Tuesday. "We should clean our own house first."