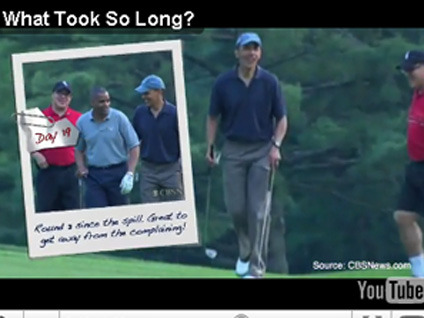 President Obama and White House officials met with BP executives yesterday and managed to secure a $20 billion commitment from the company for an independent escrow fund. But Republicans aren't going to let people forget that it took the president 58 days to have that meeting.

The Republican National Committee released a web video yesterday showing President Obama golfing, singing with celebrities and partaking in other fun activities while the oil spill in the Gulf of Mexico continues. The video opens with NBC's Matt Lauer asking the president why he "wouldn't pick up the phone and in some ways just give [BP's CEO Tony Hayward] a piece of your mind?"

The video also features the distinctive voice of Democratic strategist James Carville criticizing the president for his response to the spill, which started on April 20 when the Deepwater Horizon oil rig exploded. There's also a calendar displayed showing Mr. Obama's supposed "to do" list, with "Call BP CEO" at the bottom.

After hearing an onslaught of criticism about appearing too "hands off" in the face of the crisis, the president did an about-face some weeks ago and started a series of trips to the Gulf Coast and finally scheduled that meeting with Hayward and other BP leaders.

"What you're seeing is the White House scrambling to try to get ahead of a story," Republican strategist Dan Bartlett, a former counselor for President George W. Bush, said on CBS' "The Early Show". "Several weeks ago is when they should have given this speech to the American people."

Hayward will continue to feel the heat from lawmakers, who are sure to grill him in a congressional hearing today.

No Apologies for Light-Hearted Events on Obama's Schedule During Oil Spill CrisisCBSNews.com Special Report: Disaster in the Gulf
View CBS News In