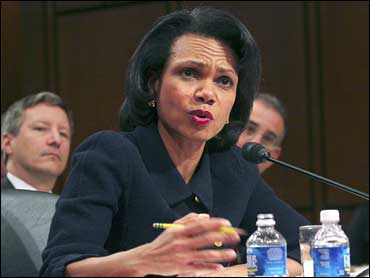 Republican senators criticized the Bush administration Wednesday over its policies in Iraq, Iran and the Palestinian territories, as Secretary of State Condoleezza Rice's first testimony on Capitol Hill in months exposed her to a tough grilling from some members of her own party.

Rice also had a tense exchange with moderate Republican Sen. Lincoln Chafee, R-R.I., over the pace of progress toward Israeli-Palestinian peace and the implications of the Hamas victory in Palestinian legislative elections last month.

Typically soft-spoken, Chafee tersely questioned whether the United States could have prevented Hamas from coming to power. "Opportunities missed," Chafee lamented after rattling off a list. "Now we have a very, very disastrous situation of a terrorist organization winning elections."

Rice said she agrees it's a difficult moment for the peace process, but responded: "I don't think the United States of America is responsible for the election of Hamas. No I don't."

"If Hamas will take the signals being given it by the international community as to what it will take to govern, it could, in fact, be a more positive development," Rice added.

Though the moderate Chafee and Hagel, a frequent GOP maverick, are less conservative than many of their Republican colleagues, their criticism underscored a widespread frustration in Congress with the difficult problems the United States is facing across the Middle East.

Rice tried to take the offensive by announcing an administration request for $75 million this year to build democracy in Iran, saying the United States must support Iranians who are seeking freedoms under what she called a radical regime.

The United States and its European allies are confronting Iran over its nuclear program. But Tehran has remained defiant and said this week that it is resuming small-scale uranium enrichment, which many countries fear could be an early step toward production of fuel for a nuclear bomb.

"They have now crossed a point where they are in open defiance of the international community," Rice said.

She declined to detail what punishment the United States is pursuing, although she did acknowledge that the United States has analyzed the impact of oil sanctions on Iran as part of a broad review of all available tools and has a "menu of options" available.

"You will see us trying to walk a fine line in actions we take," Rice said.

The money Rice wants for Iran, to be included in an emergency 2006 budget request the White House is expected to send to Congress as early as this week, would be used for radio and satellite television broadcasting and for programs to help Iranians study abroad.

At one point, Rice and Sen. Barbara Boxer, D-Calif., interrupted one another as they argued about U.S. policy in the Middle East, where the Democrat accused the Bush administration of having a "tin ear" to Arab views.

Boxer, who was one of Rice's most persistent critics during a contentious confirmation process last year, also recalled Rice's warning before the 2003 Iraq invasion that the world could not afford to let the "smoking gun" of Iraq's supposed weapons of mass destruction become a "mushroom cloud."

"That was a farce and the truth is coming out," Boxer said.

Rice plans a trip to the Middle East next week, including stops in Egypt, Saudi Arabia and the United Arab Emirates, where the issue was sure to arise.

And, Sen. Joseph Biden of Delaware, top Democrat on the panel, said "I'm not hopeful" of a unity government in Iraq.

"The policy seems not to be succeeding," he said.