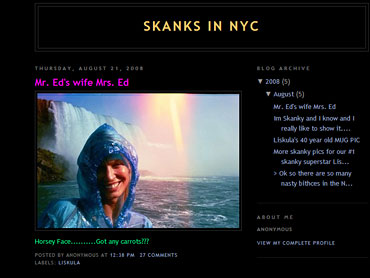 A New York court Tuesday sided with a model attempting to unmask an anonymous blogger she accuses of cyberbullying.

Canadian-born model Liskula Cohen claims that in August 2008, a site called "Skanks in NYC" featured on Blogger.com, Google's blogging service, published pictures of Cohen with words such as "psychotic" and "ho" as captions.

Cohen, a former Vogue cover girl, first filed her suit in January of this year.

"The ruling is limited to New York State and it doesn't look like it will be appealed so it will remain for the time being as authority over a City renown for lots of loose talk about celebrities. But this ruling does not apply to California, to Hollywood, or anywhere else these sorts of online comments could appear," CBS News chief legal analyst Andrew Cohen writes.

Steven Wagner, Liskula Cohen's attorney,told CNN that Google complied with the ruling Tuesday evening, and gave him the blogger's IP address and e-mail address.
Wagner said he suspected the creator of the blog is an acquaintance of Cohen, CNN reported.