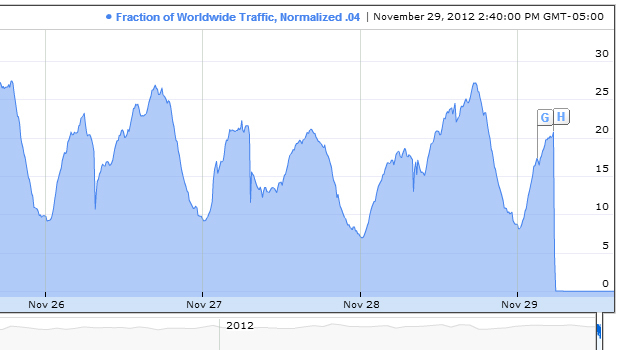 Syria has gone offline and, as of right now, the country is cut off from the rest of the world. Even as questions over how long Syria will remain blacked out loom, the future of the Internet is set to be negotiated in a meeting that could result in changes to a global treaty.

"Can't call Syria. Scary blackout, as if things can get scarier still," @BSyria tweeted Thursday, as reports started coming in that the country was experiencing service disruptions.

"In the global routing table, all 84 of Syria's IP address blocks have become unreachable, effectively removing the country from the Internet," Renesys said in a statement.

It added that the main autonomous system responsible for Internet in the country is the Syrian Telecommunications Establishment, and that "all of their customer networks are currently unreachable."

Akamai Technologies Inc., another U.S-based company that distributes content on the Internet, also confirmed a complete outage for Syria.

This isn't the first time a country has gone offline. Amid uprising during the Arab Spring in January 2011, Egypt disappeared from the Internet, at the request of the Egyptian government. In February, Iran reportedly cut access to the Internet, as well.

Egypt and Iran eventually came back online, but at this point it's unclear if Syria will flip the switch back on anytime soon.

People shared commentary on Twitter as news of the Internet blackout spread.

"The only think more horrifying than the atrocities occurring daily in Syria is that the world won't be able to see/hear it." @BklynMiddleton tweeted.

Google chimed in and made the case for a free and open Internet -- a cause the search giant has been trying to drum up attention towards.

"Internet access completely cut off in Syria. This is why a #freeandopen Internet is so important," @Google tweeted.

Google is calling for people to support a free and open Internet ahead of a meeting that is scheduled to take place on Dec. 3.

"The International Telecommunication Union (ITU) is bringing together regulators from around the world to re-negotiate a decades-old communications treaty," Google said on its website.

Some of the topics to be discussed include censorship, access fees and the power of governments to cut access to the Internet.

"Governments alone should not determine the future of the Internet. The billions of people around the globe that use the Internet, and the experts that build and maintain it, should be included," Google writes.

View a timeline to tweets below.