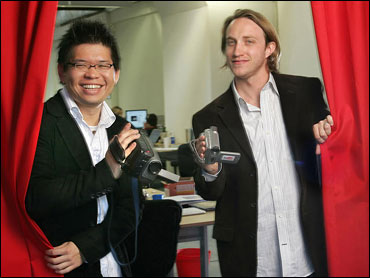 Google Inc. is snapping up YouTube Inc. for $1.65 billion in a deal that catapults the Internet search leader to a starring role in the online video revolution.

The all-stock deal announced Monday unites one of the Internet's marquee companies with one of its rapidly rising stars. It came just hours after YouTube unveiled three agreements with media companies in an apparent bid to escape the threat of copyright-infringement lawsuits.

The price makes YouTube, a still-unprofitable startup, by far the most expensive purchase made by Google during its eight-year history.

Although some cynics have questioned YouTube's staying power, Google is betting that the popular Web site will provide it an increasingly lucrative marketing hub as more viewers and advertisers migrate from television to the Internet.

YouTube will continue to retain its brand, as well as all 67 employees, including co-founders Chad Hurley and Steve Chen. The deal is expected to close in the fourth quarter of this year.

"I'm confident that with this partnership we'll have the flexibility and resources needed to pursue our goal of building the next-generation platform for serving media worldwide," said Hurley, YouTube's 29-year-old CEO.

"One of the problems with YouTube is that they've been known to carry copyrighted material without the permission of the copyright holders," Magid said.

But Hurley and Chen, 27, have spent months dealing with the copyright hurdle by cozying up with major media executives in an effort to convince them that YouTube could help them make more money by helping them connect with the growing number of people who spend most of their free time on the Internet.

While Google has been hauling away huge profits from the booming search market, it hasn't been able to become a major player in online video.

That should change now, predicted Forrester Research analyst Charlene Li. "This gives Google the video play they have been looking for and gives them a great opportunity to redefine how advertising is done," she said.

Investors applauded the possible acquisition as Google shares climbed $8.50, or 2 percent, to close at $429 on the Nasdaq Stock Market.

"This deal looks pretty compelling for Google," said Standard & Poor's analyst Scott Kessler said. "Google has been doing a lot of things right, but they are not sitting on their laurels."

Google's YouTube coup may intensify the pressure on Yahoo to make its own splash by buying Facebook.com, the Internet's second most popular social-networking site. Yahoo has reportedly offered as much as $1 billion for Palo Alto-based Facebook during months of sporadic talks.

"Yahoo really needs to step up and do something," said Roger Aguinaldo, an investment banker who also publishes a deal-making newsletter called the M&A Advisor. "They are becoming less relevant and looking less innovative with each passing day."

Selling to Mountain View-based Google will give YouTube more technological muscle and advertising know-how, as well as generate a staggering windfall for a 67-employee company that was running on credit card debt just 20 months ago.

Since Hurley and Chen founded the company in February 2005, YouTube has blossomed into a cultural touchstone that shows more than 100 million video clips per day. The video library is eclectic, featuring everything from teenagers goofing off in their rooms to William Shatner singing "Rocket Man" during a 1970s TV show. The clips are submitted by users.

"What's nice from YouTube's perspective is that they don't even have to pay for a lot of that content," reported Magid. "Much of it is uploaded by people who just want to use the service to show off their talent."

YouTube's worldwide audience was 72.1 million by August, up from 2.8 million a year earlier, according to comScore Media Metrix.

YouTube's conciliatory approach with major media has recently yielded several licensing and promotional agreements that have eased some of the copyright concerns while providing the company with some financial breathing room until it becomes profitable.

To conserve money as it subsisted on $11.5 million in venture capital, YouTube had been based in an austere office above a San Mateo pizzeria until recently moving to more spacious quarters in nearby San Bruno.

The truce with Universal represented a particularly significant breakthrough because the world's largest record company had threatened to sue YouTube for copyright infringement less than a month ago.

Li and Kessler expect even more media companies will be lining up to do business with YouTube now that Google owns it.

"It's going to be like, 'You can either fight us or you can make money with us,"' Li predicted.