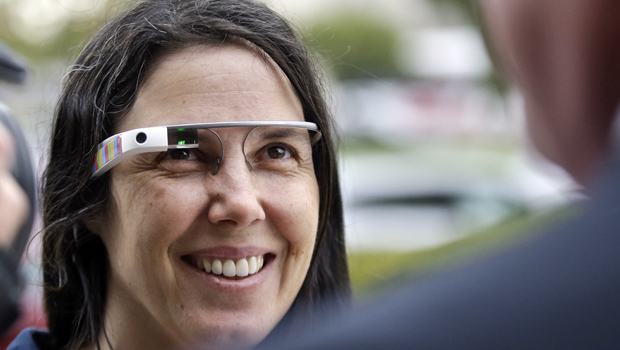 SAN FRANCISCO -- Google is lobbying officials in at least three U.S. states to stop proposed restrictions on driving with headsets such as Google Glass, marking some of the first clashes over the nascent wearable technology.

Some eight U.S. states are considering regulation of Google Glass, a tiny computer screen mounted in the corner of an eyeglass frame. Law enforcement and other groups are concerned that drivers wearing the devices will pay more attention to their email than the road, causing serious accidents.

So-called wearables such as Google Glass, smart watches and sophisticated health devices may represent the next big shift in technology, just as smartphones evolved from personal computers, and enthusiasts predict billion-dollar markets. Google, which is still testing Glass, charges $1,500 per pair.

Google Inc. has deployed lobbyists to persuade elected officials in Illinois, Delaware and Missouri that it is not necessary to restrict use of Google Glass behind the wheel, according to state lobbying disclosure records and interviews conducted by Reuters.

Legislators who introduced similar bills this year in three other states, New York, Maryland and West Virginia, say they have not yet been contacted by Google. Officials in New Jersey and Wyoming did not respond to inquiries from Reuters.

Courts are just beginning to consider the matter. Last month in San Diego, for instance, a woman's traffic ticket for wearing Google Glass behind the wheel was dismissed because there was no proof the device was operating at the time.

Google's main point to legislators is that regulation would be premature because Google Glass is not yet widely available, the state elected officials say.

Illinois state Senator Ira Silverstein, a Chicago Democrat who introduced a Google Glass restriction bill in December, responded that it was clear the merchandise was heading for the broader public. "Who are they fooling?"

Silverstein said he recently met with Google lobbyists trying to "kill" the bill, a position Silverstein suggested is driven by market considerations for the company.

Borovicka did not respond to a request for comment.
Asked about its lobbying efforts, Google said tech issues are a big part of current policy discussions in the states. "We think it is important to be part of those discussions," the company said in a statement.

Google has been scheduling Glass demonstrations across the country in an effort to educate the public on how the technology works.

"While Glass is currently in the hands of a small group of Explorers," the company said, "we find that when people try it for themselves they better understand the underlying principle that it's not meant to distract but rather connect people more with the world around them."

Campaigns against distracted driving have gained significant traction in the United States. In 2012, over 3,000 people died due to crashes where texting or other activities were in play, according to Distraction.gov, a U.S. government web site devoted to the issue.

Delaware state Rep. Joseph Miro was one of the primary sponsors of a bill that banned texting while driving, and he also introduced legislation targeting Google Glass. So far, no states have passed Google Glass restrictions.

"I'm not against Google or Google Glass. It may have a place in society," said Miro, a Republican. "My issue is that while you are driving, you should have nothing that is going to impede the concentration of the driver."

According to Miro, a Google representative lobbied against the bill by forwarding a news article about the San Diego court case, as an attempt to show that the courts are taking a dim view towards prosecutions. His bill passed committee and could receive a floor vote this spring, Miro said.

Google's position is at odds with groups like the Delaware Developmental Disabilities Council, which in a letter last year said it supported restrictions on drivers' use of headsets such as Google Glass, believing it will lead to more accidents, causing more spinal cord and traumatic brain injuries.

Google advises people engaged in Glass field tests to abide by state laws that limit use of mobile devices while driving.

"Above all, even when you're following the law, don't hurt yourself or others by failing to pay attention to the road," the company said in guidance posted online.

Not all legislators pushing a Google Glass restriction have been visited by the company, however. In West Virginia, House of Delegates member Gary Howell, a Republican, said he has heard from out-of-state Google Glass users opposed to the bill but not from the company itself.

For Maryland House of Delegates member Benjamin Kramer, the San Diego traffic case shows a need for clear state laws. When a driver is pulled over, it will always be extremely difficult for law enforcement to prove whether Google Glass had been operating, said Kramer, a Democrat.

"The way to get around it is just to prohibit them altogether," he said.

App exposes how people name you on their phones
Thanks for reading CBS NEWS.
Create your free account or log in
for more features.
View CBS News In
CBS News App Open
Chrome Safari Continue
Be the first to know
Get browser notifications for breaking news, live events, and exclusive reporting.