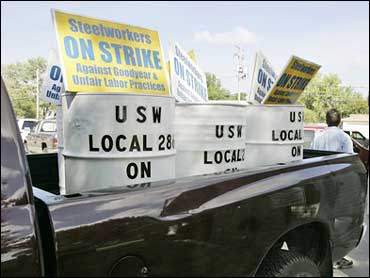 Workers at 16 Goodyear Tire & Rubber Co. plants in 10 states and Canada went on strike Thursday after the world's third largest tire maker and the steelworkers union failed to agree on a new labor contract.

The union said the company's latest proposal would have included two plant closings.

"The company left us with no option," said Ron Hoover, executive vice president of the United Steelworkers of America, which represents the Goodyear workers. "We cannot allow additional plant closures after the sacrifices we made three years ago to help this company survive."

The old contract expired July 22 and both sides agreed to an indefinite day-to-day extension. The Steelworkers issued a 72-hour notice on Monday and said they would terminate the contract at midday Thursday if an agreement wasn't reached.

The company said it was prepared to keep its plants open and take care of its customers but did not immediately say how it planned to do that.

Goodyear ranks No. 3 in the world in tire sales, based on revenues, behind top-ranked Bridgestone and No. 2 Michelin, according to the trade publication Tire Business.

"Our final offer to the union included a plan to secure retiree medical benefits and provide job security and investment guarantees for USW plants," Markey said. "The union rejected a comprehensive set of proposals that mirror the other industry agreements."

The union said it represents 15,000 employees at 12 Goodyear plants in the U.S. and four plants in Ontario, Canada. By the company's count, the U.S. plants have about 12,600 employees represented by the Steelworkers.

In Akron, where the 108-year-old company is based, workers at Goodyear's research center streamed out of the building at 1 p.m. and joined union members holding signs on the picket line.

Within minutes, scores more arrived to join the picket line, where people chanted. Goodyear office workers coming out at lunch time walked past the pickets without stopping and motorists honked horns as they passed.

In Tonawanda, N.Y., a Buffalo suburb, many of the 1,200 workers at the Dunlop plant where motorcycle and truck tires are made drove away shouting and honking car horns. About a dozen sign-carrying members of Local 135 set up a picket.

"We were hopeful that the company would change its mind," said Al Tomasello, 64, who has worked at the plant for nine years. "They're trying to work us for a 40-percent cut in pay. We're just trying to get what we already have. We're not trying to change nothing."

Red and white signs announcing the strike were stuck in the ground along the road leading to the St. Mary's rubber plant entrance, where about a dozen workers huddled together under a tent to seek shelter from the chilly fall air in western Ohio.

Pat Jackson, 46, a nine-year employee in the mixing department, said workers are worried about losing their jobs to other countries.

"It's more trying to keep jobs here in the U.S.," he said. "At some point you have to take a stand."

Rick Niekamp, vice president of the Local 200, said the company's most recent offer included wage cuts and a two-year freeze on pensions. The union also was unhappy with the health care offer for workers and future retirees.

"The final offer didn't come close to meeting anything that we needed," he said.

Without giving details, Goodyear said it believes its final offer protected jobs and secured pensions. The union failed to agree to terms found in Steelworkers contracts with other tire makers that the company believes are necessary to survive in the global economy, the company said.

In August, union members at BFGoodrich approved a master contract covering 4,000 members at its plants in Fort Wayne, Ind., Tuscaloosa, Ala., and Opelika, Ala. The three-year contract guarantees no plant closings.

In the 2003 agreement, the Steelworkers agreed to a closure of Goodyear's Huntsville, Ala., facility as well as providing Goodyear with additional financial flexibility by accepting wage, pension and health care cuts.