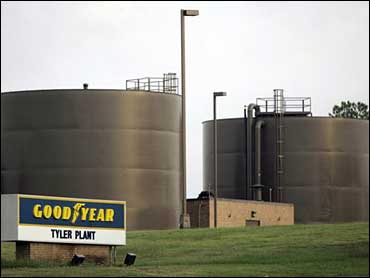 Goodyear Tire & Rubber Co. said on Monday that it plans to close a plant in Tyler, Texas, three weeks after workers at the factory and 15 others went on strike in part because of the tire maker's plan to shut down the plant.

The move will eliminate about 1,100 jobs and is part of Goodyear's strategy to end some of its private label tire business.

The plant, which opened in 1962, has produced approximately 25,000 passenger and light truck tires per day.

In Danville, Va., about 20 cars containing temporary workers crossed the picket line Monday morning at the Goodyear's plant. Cars that began entering the plant about 6 a.m. were met by some 300 striking Steelworkers carrying signs who yelled "scab."

About 10 Danville police officers were stationed outside the plant, and Police Chief Philip Broadfoot said no problems were reported.

Goodyear has said the union refused to agree to help it remain competitive in a global economy. The union said the company's last proposal would have included two plant closings and other concessions.

Goodyear said in June that it wanted to exit parts of the private label tire business and that the decision would mean a reduction in capacity. Goodyear previously announced to investors an aggressive strategy to reduce costs by more than $1 billion by 2008.

"We must take the steps necessary to reduce our costs and improve our competitive position," Jon Rich, president of North American Tire, said in a statement. "While this is an extremely difficult decision for everyone involved, it was required to help turn around our North American business."

He did not say when the plant will close.