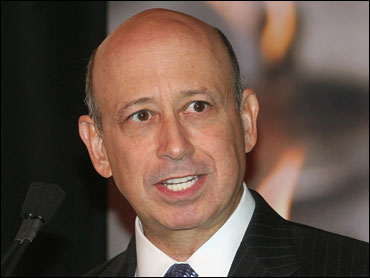 In a regulatory filing posted Friday morning, the New York investment bank detailed Blankfein's compensation for last year. Goldman paid its chairman and CEO a salary of $2 million, a bonus of $3 million and stock awards worth $10.7 million.

Blankfein's total pay included $9,800 in matching payments to his retirement plan, $51,467 for a car and driver and $258,701 for security services. The amount Goldman paid for his security more than doubled from the year before.

Goldman said it believes the security provided for its executive officers "is required in light of the elevated threat profile in the current environment." The statement called the security services "business-related necessities" for Goldman's high-profile executives.

Blankfein's pay rose even as Goldman Sachs endured an unusually tough year. Goldman reported a 47 percent drop in earnings to $4.4 billion in 2011, as rocky financial markets battered Goldman along with the rest of Wall Street. That included a third quarter in which the bank lost money for only the second time since it became a publicly traded company in 1999.

The bank's net income for the last three months of the year fell 58 percent as fear about the European debt crisis kept the stock and bond markets volatile and clients of all the major banks shied away from mergers as well as new sales of stock.

Goldman's practices have come under fire from federal regulators and its own employees. In an agreement announced Thursday, Goldman said it would pay $22 million to settle regulatory charges that its analysts shared confidential research with favored clients.

Greg Smith, an executive director at the bank, resigned by writing an essay in The New York Times, accusing the bank of losing its "moral fiber," putting profits ahead of customers' interests and dismissing customers as "muppets."

Goldman could bounce back with solid results when it reports earnings Tuesday. Analysts expect it to report a profit of $3.46 per share on revenue of $9.3 billion, according to the data provider FactSet.