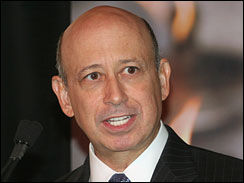 (AP Photo/David Karp)
Goldman Sachs executives may be arming themselves out of fear of a public uprising, according to a Bloomberg column by Alice Schroeder. The columnist learned this from a friend who had been a reference for a Goldman banker trying to get a gun permit. Apparently, the unnamed banker is not alone.

Schroeder did not get a response from Goldman Sachs Spokesman Lucas van Praag, but the NYPD told her that some of the bankers had indeed received gun permits.

In addition to weaponry, Goldman Sachs is trying to arm itself against public outrage over the financial crisis and bailout by donating – along with Warren Buffett - $500 million. Chief Executive Lloyd Blankfein retracted an earlier statement that Goldman's greed had been "God's work" and apologized for participating in the events that led to the near collapse of our economic system.

But Goldman has a lot to defend itself against. The public fumed when it learned that Goldman Sachs had earned a record $27 billion in the first nine months of the year. Bankers who had caused the financial meltdown were profiting at enormous rates from the rest of America's tax dollars.

"Plenty of Wall Streeters worry about the big discrepancies in wealth, and think the rise of a financial industry-led plutocracy is unjust," Schroeder writes. "That doesn't mean any of them plan to move into a double-wide mobile home as a show of solidarity with the little people, though."

Instead, she argues, Wall Street would rather cling to its wads of cash with one hand and a gun in the other.