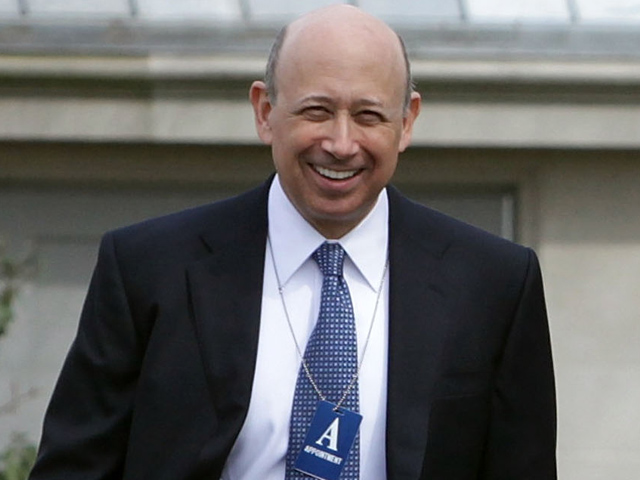 (AP) TORONTO - The chief executive of Goldman Sachs (GS) said Wednesday he is against austerity measures in the short term as the U.S. "fiscal cliff" looms.

Lloyd Blankfein, also chairman of the investment bank, said during a talk at the Canadian Club of Toronto that he's all for budget cutbacks in the long term but not right now.

Blankfein said, "You can't austere yourself into a higher GDP" and added, "It's not going to be very good if the medicine kills the patient." He said there can't be another stimulus because of the consequences to the government's balance sheet and said the U.S. has to convince the market it will deal with its problems in the long term.

"I'm all for implementing budget changes that accelerate over the long term, but in the short term I wouldn't take too much money away from people or cut back on a lot of expenditure programs," Blankfein said.

The U.S. faces the prospect of a debilitating "fiscal cliff" in January, when Bush-era tax cuts expire and across-the-board spending cuts are set to take effect. Economists warn that unless Congress acts, the one-two austerity punch would send the fragile economy back into recession.

Blankfein, who took questions from Royal Bank Chief Executive Gord Nixon, said Republicans and Democrats have the power to solve the problem, but a "defect" in the political system has prevented moderates from agreeing. But Blankfein noted that historically, political leaders in the U.S. haven't let things crash.

"Things have always worked themselves through and I think they will now, but that fiscal cliff is looming as a real problem, and it doesn't have to be," he said.

Blankfein said no one is debating whether the U.S. has a fiscal deficit problem, but the question remains how the U.S. will resolve it.

"How to solve it has resulted in an impasse, but the fact that everyone agrees that it needs to be resolved is really the most important thing," he said.

Blankfein also said he thinks the world economy will continue to "muddle through." He said Europe has a growth problem and said the biggest risk is a breakup of the euro, but he noted that pro-euro parties are in power. He said European countries have to sponsor growth and yet promise austerity and balanced budgets in the long term. "That's the challenge ahead, but I think they have enough time and the right political will to get this done," he said. "There's a chance of it going off the rails there, but I think it's much less likely than it would have been a few months ago."

Blankfein also said a hard landing in China would represent a real threat to the world economy because a lot of the demand in the world over the last five years has come from China.

"I'm very confident in the outcome, but you have to recognize that it is one of the risks of the world that instead of providing a lot of extra demand, China disappoints, but it won't be for a long time if it does," he said.