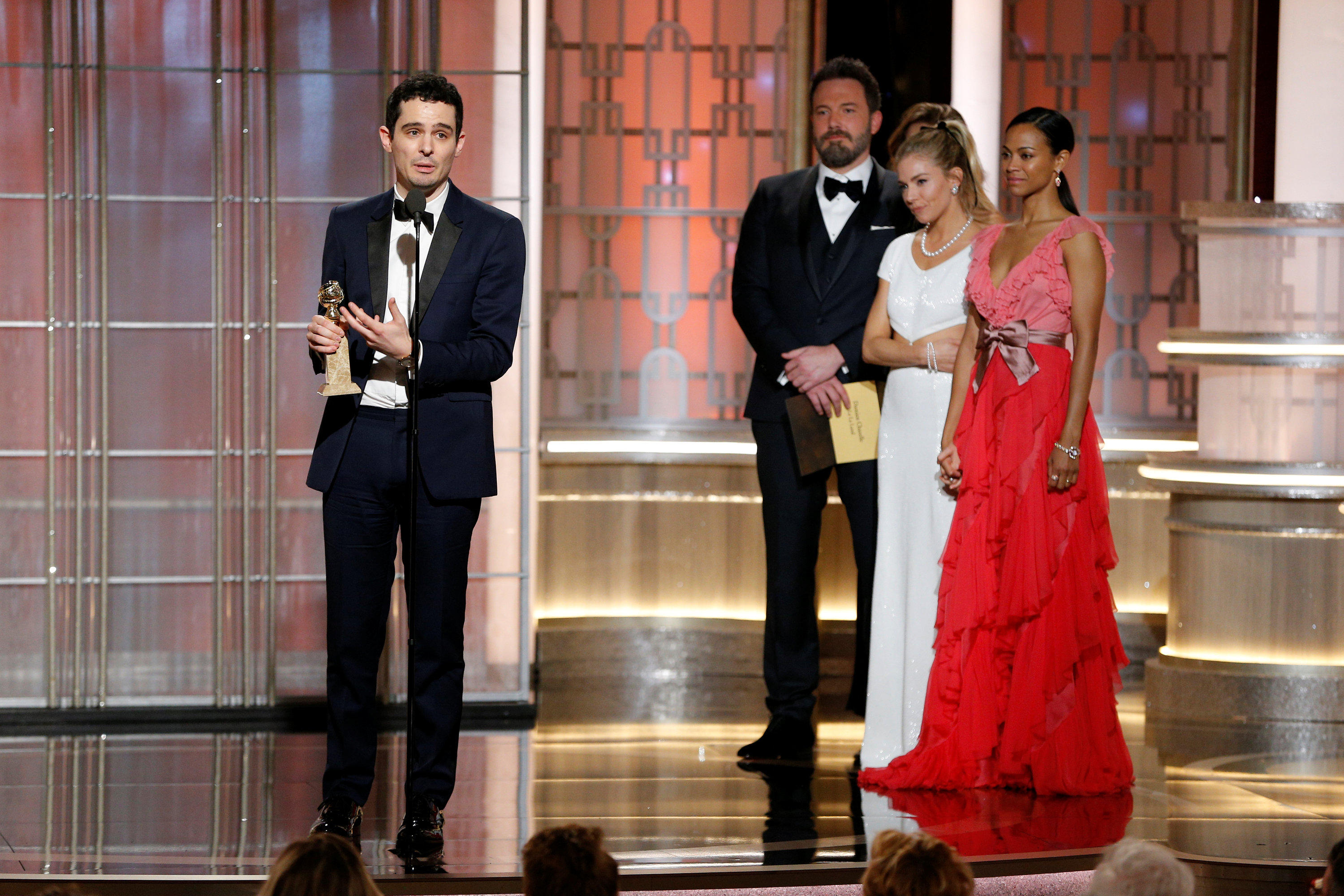 The stars of movies and television were out in force in Hollywood Sunday night for the 74th Golden Globe Awards, the first big night of awards season -- and a major bellwether for the Academy Awards -- and the night belonged to “La La Land” and “Moonlight.”

While Damien Chazelle’s “La La Land” went home with all seven of the awards for which it was nominated, “Moonlight” nabbed just one Globe -- but it was a big one.

This year’s host, Jimmy Fallon, staked his claim on the show early with an opening number that riffed on the rousing musical number that opens “La La Land.” The clip started with Fallon stuck in traffic on his way to the red carpet, singing along with Nicole Kidman, Amy Adams and many more.

The clip featured John Travolta sneaking in a “Saturday Night Fever” reference, the kids from “Stranger Things” rapping from the back of a truck and the show’s cult favorite, Barb, resurrected from the swimming pool where she disappeared.

The “La La Land” tribute continued with Fallon serenading -- and sharing a mint with -- a swooning Ryan Reynolds and dancing among the clouds with Justin Timberlake, who brought along a spot-on Fallon impression.

But once the show went live things started to go wrong as the telemprompter malfunctioned, leaving Fallon to wing it.

“This is the Golden Globes, one of the few places left where America still honors the popular vote,” he joked.

While Fallon tried out some bits at the expense of Chris Rock, Matt Damon and “Manchester by the Sea,” he brought along some backup from the “Tonight Show”: Roots drummer Questlove, who served as DJ for the night.

Reynolds and “La La Land” star Emma Stone handed out the first award of the night, Best Supporting Actor in a Motion Picture, which went to Aaron Taylor-Johnson for “Nocturnal Animals.”

Jeffrey Dean Morgan and Priyanka Chopra then arrived to award Best Actor in a Television Series, Drama to Billy Bob Thornton for “Goliath.”

“I do have to thank the Hollywood Foreign Press Association for picking me over Bob Odenkirk,” Thornton joked, fabricating a feud with the “Better Call Saul” actor dating back to the 1940s.

Hugh Grant then took the stage to introduce a look at his film, “Florence Foster Jenkins” -- but only after a technical issue caused the announcement to call Grant “already a Golden Globe winner tonight.”

Drew Barrymore and Timothy Olyphant then handed out the award for Best Actress in a Television Comedy, which went to “black-ish” star Tracee Ellis Ross, who beat out “Veep” star Julia-Louis Dreyfus and last year’s winner, “Crazy Ex-Girlfriend” star Rachel Bloom, among others.

“This is for all the women, women of color and colorful people who’s stories are always not considered worthy or valid,” Ross said during her speech.

Barrymore and Olyphant then stuck around to announce the Best Television Series, Musical or Comedy, which went to Donald Glover’s freshman series “Atlanta.”

Sticking with the television categories, Nicole Kidman and Reese Witherspoon then took the stage to award Sarah Paulson Best Supporting Actress in a Limited Series or TV Movie for “The People v. O.J. Simpson” -- the same role for which Paulson won an Emmy in September.

Kidman and Witherspoon then announced the winner for Best Limited Series or TV Movie, which netted another win for “The People v. O.J. Simpson.”

Naomi Campbell and Matt Bomer then handed out another award for Limited Series or TV Movie, with Hugh Laurie taking Best Supporting Actor for “The Night Manager.”

Laurie got political with his speech, worrying that this would be the last Golden Globes: “It has Hollywood, foreign and press in its name, so I just don’t know,” he cracked. “I think to some Republicans, even the word ‘association’ is slightly sketchy.”

Sting and Carrie Underwood announced a pair of music-based awards, starting with the winner for Best Original Score, which went to Justin Hurwitz, securing the first award of the night for “La La Land.”

Michael Keaton announced the winner for Best Supporting Actress in a Motion Picture -- Viola Davis for “Fences” -- but not before mangling the name of nominee Octavia Spencer’s film, calling it “Hidden Fences,” which may or may not have been a nod to Jenna Bush’s screw-up on the red carpet during a chat with Pharrell Williams.

Kristen Bell and a rather rambunctious Cuba Gooding Jr. took the stage to present the award for Best Supporting Actress in a Series, Limited Series or TV Movie, which went to Olivia Colman for “The Night Manager” -- though she wasn’t present to accept it.

Amy Schumer and Goldie Hawn then came out to comically butcher the reading of the nominees for Best Actor in a Comedy or Musical before finally introducing the winner: Ryan Gosling, for “La La Land,” greatly increasing the chances for the film to sweep all of its nominated categories.

Gosling used his speech to pay tribute to his partner, Eva Mendes, and their two daughters before dedicating the award to Mendes’ late brother.

Steve Carell and Kristen Wiig introduced the Best Animated Film category, but not before they could share anecdotes about their first experiences watching an animated film that got very, very dark. Disney ended up taking the trophy, winning with “Zootopia.”

Fallon then introduced a special tribute to Debbie Reynolds and Carrie Fisher, honoring the mother-daughter duo who died less than two weeks ago.

Though they play superheroes for rival companies, Chris Hemsworth and Gal Gadot came together to present the Golden Globe for Best Foreign Language Film, which went to France’s “Elle,” starring Isabelle Huppert, whom director Paul Verhoeven lauded from the stage.

Anna Kendrick and Justin Theroux then announced Best Actor in a TV Series, Drama, which went to Tom Hiddleston, bringing home a third Globe for “The Night Manager.”

Best Actress in a TV Series, Drama went to “The Crown” star Claire Foy, beating out stars from “The Americans,” “Westworld” and “Stranger Things.”

“I think the world could do with a few more women at the center of it,” Foy said while paying tribute to her character, Queen Elizabeth II. The series also won for Best Drama Series, besting awards juggernaut HBO’s “Westworld” and “Game of Thrones.”

Viola Davis then took the stage to pay tribute to the evening’s recipient of the Cecil B. DeMille Award for Lifetime Achievement, Meryl Streep. “She is an observer and a thief,” Davis said. “I can only imagine where you go, Meryl, when you disappear into a character.”

Audiences were then treated to a montage of Streep’s 40 years on the silver screen, 30 Golden Globe nominations and eight wins.

A very tearful Streep apologized for having lost her voice prior to the ceremony. “There was one performance this year that stung me,” she said, referring to Donald Trump’s mocking of a disabled New York Times reporter. “I still can’t get it out of my head because it wasn’t in a movie.”

“Disrespect invites disrespect,” she continued. “When the powerful use their position to bully others, we all lose.” Streep then called for an emboldened press to hold those in power accountable.

Streep ended with a tribute to Carrie Fisher, relating advice the late actress had given her: “Take your broken heart; turn it into art.”

“I moved here 13 years ago this week,” she said, thanking her family for their support. “This is a film for dreamers. I think hope and creativity are two of the most important things in the world.”

Jessica Chastain and Eddie Redmayne then took the stage -- after Fallon had pointed out that their names rhyme -- to present “La La Land” with its final award of the night, Best Motion Picture, Musical or Comedy, cementing the film’s sweep of its awards for the night.

Sylvester Stallone and Carl Weathers then re-teamed to present the final award of the night, Best Motion Picture, Drama, which went to indie drama “Moonlight,” directed by Barry Jenkins.