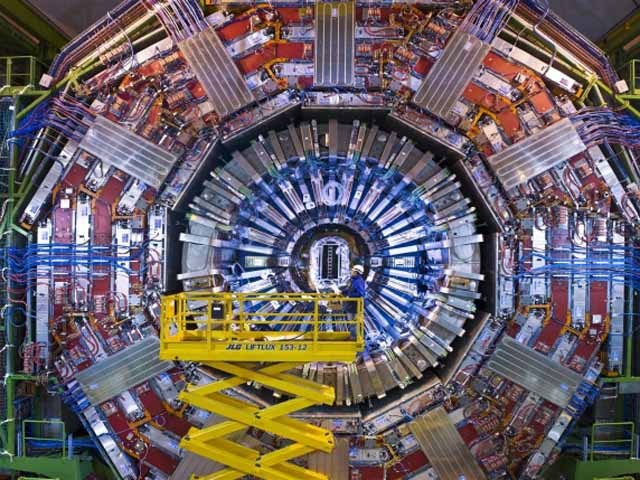 The Large Hadron Collider sits 300 feet below the surface of the Earth on the rural France-Switzerland border, spinning and smashing particles at near-light speed, costing many billions of dollars, and consuming countless hours of some of the best scientific minds in the world, mostly to answer one important question: What, exactly, is matter?

Almost everyone who sat through junior high school science class knows that atoms are the building blocks of life on earth. Moving down a subatomic level, we also all learned that atoms are made of electrons, protons and neutrons (a.k.a. hadrons.) A studious few among us learned that those elementary particles are made up of quarks. No one knows what makes up a quark.

However, physicists in charge of the Large Hadron Collider announced Saturday that they believe they will solve the so-called God Particle riddle by the end of next year, ending a decades-long quest by physicists to explain something that strays into spiritual, philosophical and plain-old fantastical realms, Agence France Presse reports.

The God Particle is more commonly known in scientific circles as the Higgs boson, so named for the British physicist Peter Higgs, who postulated that it might by the thing that makes up quarks in 1964.

"I'm pretty confident that towards the end of 2012 we will have an answer to the Shakespeare question for the Higgs boson -- to be, or not to be?" said Rolf-Dieter Heuer, on Saturday. Heuer is the director general of the European Organisation for Nuclear Research (CERN), which manages the Large Hadron Collider.

The announcement by CERN's director may be a game of scientific one-upmanship, however, as there has been a long battle across the Atlantic between European and American physicists to be the first to solve this riddle.

The 25-year-old Tevatron particle accelerator in Chicago has said it is shutting down its operations in September, but not before announcing in April that they might have discovered a new elementary particle or fundamental force of nature, The New York Times reports.

It might or might not be a coincidence that CERN announced its ambitious plan to solve the God Particle riddle shortly after Tevatron's announcement.

Tevatron was the most powerful atom-smasher in the world until the Large Hadron Collider came along. Proving, or disproving, the Higgs boson's existence has been a large part of the reason for the latter's $10 billion creation.

Both colliders work in relatively the same way. Scientists use them to spin particles at nearly the speed of light and then smash them together, carefully studying the debris afterwards.

AFP writes that "the smashups briefly stoke temperatures 100,000 times hotter than the Sun, fleetingly replicating conditions which prevailed split-seconds after the "Big Bang" that created the Universe 13.7 billion years ago. In this primordial soup, novel particles may lurk that will resolve mysteries clouding our understanding of fundamental matter."

The Large Hadron Collider's startup in 2008 briefly stoked fears it might create a black hole that would swallow the Earth. It didn't.

Now, instead, of ending all life as we know it, scientists say it may soon give us an answer to the universe's most fundamental riddle.