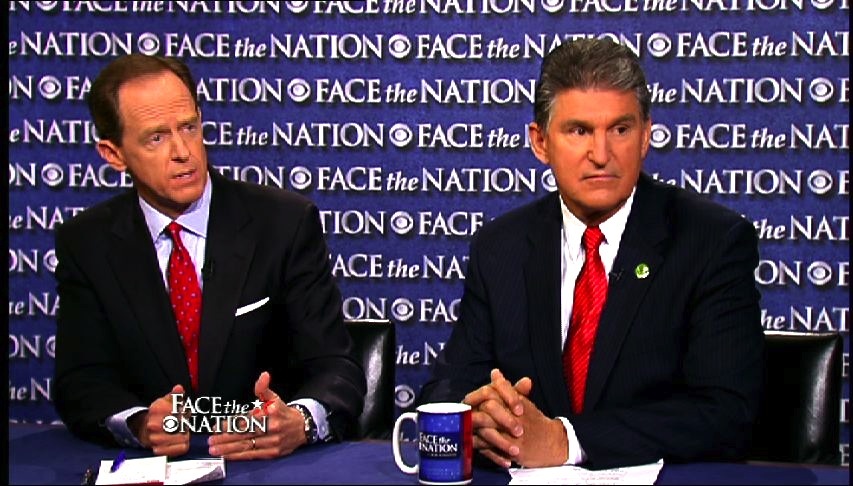 (CBS News) Sen. Pat Toomey, R-Penn., is "confident," he said Sunday on "Face the Nation," that he and Sen. Joe Manchin, D-W.Va., will be able to muster enough Republican support in the Senate to pass an amendment that would expand background checks for gun purchases.

"We're close," said Toomey said, appearing with Manchin. "We're discussing with colleagues on both sides. We've got bipartisan support, but there is bipartisan opposition."

Toomey and Manchin, along with Sens. Mark Kirk, R-Ill., and Chuck Schumer, D-N.Y., announced last week they had struck the deal, which would expand background checks for gun purchases to all commercial sales - including at gun shows and via the Internet.

On Saturday, Maine Sen. Susan Collins became the third Republican to back the proposal, which will appear as an amendment to the current gun safety bill being mulled by the Senate; Toomey said others have unofficially committed.

"It's very hard to say what amendments may succeed and which may fail," Toomey conceded. But, he added, "ours, I think, just strikes the right balance.

"... One quick example," he continued, "under current law, a veteran can very easily be denied Second Amendment rights. A social worker at [the Department of Veterans Affairs] can decide that this person is having trouble handling their personal finances, and bingo, they're denied their Second Amendment rights. We create a mechanism by which they can simply challenge and adjudicate that. It's very reasonable."

Though the amendment would tighten current law, it's not as far-reaching as the proposal President Obama and Senate Democrats offered in the months following the mass shooting at a Newtown, Conn., elementary school. Manchin predicted opposition won't necessarily come exclusively from the right.

"This is not universal, let me be very clear," Manchin said. "This is a criminal and mental background check bill; only at gun shows and Internet sales. There's going to be some people who said you didn't go far enough. Some are saying you went too far. But if they'll look at the bill, what we did, we did right. And we have cut down, the gun, the loophole in the gun shows and those on Internet sales, and that's what we tried to do. And we made no, no exceptions on that."

Not "a single word" in the legislation "in any way infringes on the Second Amendment rights of a law-abiding citizen," Toomey agreed. "But we think that the laws that make it illegal now for a criminal, a potentially violent, dangerously, mentally ill person, to have a weapon, that's the law of the land. We think that makes sense. ... And so, I think when people see the bill they're going to support it."

Former astronaut Mark Kelly - the husband of former Rep. Gabrielle Giffords, D-Ariz., who continues to recover from a 2011 assassination attempt that left six dead and 11 wounded - said later on the show an expansion of the current background check system would be "a huge success."

"If we get that passed, and I think we will, it is a big deal," Kelly said. "Right now, 40 percent of guns are bought at gun shows or through, over the internet without a background check. So it's very easy for the criminals, the dangerously mentally ill, to get a gun. So closing those loopholes, I think, is the number one thing we can do to reduce gun violence in this country."

Some Republicans have voiced concern that more extensive background checks will lead to a federal registry or result in door-to-door weapons confiscation. Toomey cited such worries as "misconceptions about what's in this bill - what it does."

Sen. Marco Rubio, R-Fla., who met last week with the families of the 26 Newtown victims when they came to lobby on Capitol Hill, called the meeting an "indescribable experience." But he cautioned against any bill that places guns at the center of the problem: "The debate needs to be about violence," he said. "My skepticism about gun laws is that criminals don't follow the law, they don't care what the law is. You can pass any law you want; criminals, by definition, they're criminals."

Manchin suggested Rubio read the bill, which is "only 49 pages," but said he understands the pressure on lawmakers who are in "very difficult districts."

"We came here to do something," Manchin said. "We've got a chance to make a difference in people's lives. We have a chance to save lives and not infringe on law-abiding citizens of this country, gun owners like myself and Pat [Toomey]. We have that opportunity, and God help us if we don't do it."