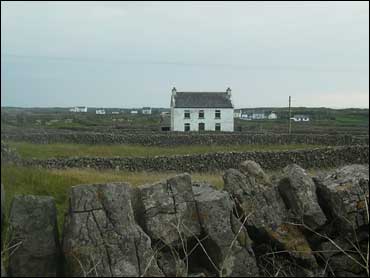 Inis Mor, the largest of the Aran Islands west of Ireland, is famous for its wild, rugged beauty, a thousand miles (1,600 kilometers) of stone walls, stunning views across the Atlantic and clusters of ancient ruins.

Playwright J.M. Synge, best known for his masterpiece "The Playboy of the Western World," spent time on the Aran Islands around 1900. Synge was drawn to the resilient, hard-bitten people and their fierce cultural independence.

But these days locals worry that the islands that inspired Synge have gone too far in pursuit of tourist dollars. Ruddy-faced islanders who were once devoted to mackerel fishing now offer horse and cart rides to ferry-loads of day-tripping tourists. Supermac's, a fast-food restaurant near the Inis Mor harbor, was labeled "vulgar" by residents like Mary Gallagher. Even a government-sponsored "Tidy Towns" contest scolded the island over Supermac's, saying it did "not fit well with the rest of the island streetscape."

Supermac's is now closed, due to what its manager, Shane Singh, called "a bad tourist season." But that decrease in visitors could make this the perfect time to explore the island's charms undisturbed. I've been coming to Inis Mor since I was 7 years old, and to me, these Gaelic-speaking islands and their haunting landscape still offer plenty of authentic culture and byways.

Martin O'Brien, who works for Island Ferries in County Galway, remembers when tourists first started showing up in significant numbers in the 1970s.

"They'd wait for a fishing boat to take them across and they'd leave at 3 or 4 in the morning. You could be stuck out there for days," he said, speaking in Gaelic with an ease that generations of Irish governments have unsuccessfully tried to instill in the wider Irish populace.

Today, superfast ferries from Galway take just half an hour to reach Cill Ronain, the main harbor town on the island. The Aran Islands also include two other less touristed islands, also reachable by boat: Inis Meain and Inis Oirr. You can also reach the islands by airplane - one of several concessions to modernity the islands have recently made, along with Inis Mor's electricity supply from the mainland and broadband Internet access.

If you're considering a trip this summer, there's no better time to visit than the weekend of June 26-28, when Inis Mor runs its Patrun Festival. The annual event shows off the best of the island's traditional way of life, with boat races that include Galway hookers, which are large, red-sailed boats, and curraghs, long tar-coated rowboats that have become an emblem of the west of Ireland.

Organizers say the festival is fun for all the family, with tug-of-war, sandcastle competitions and donkey rides. There is also traditional Irish dancing and music along the pier, which attracts some of the best musicians from Aran and the nearby counties of Galway and Clare, both known for their traditional music.

During breaks in festivities, biking and walking are the best ways to experience the island's pristine beaches and patchwork of tiny, stone-bordered fields. Most of the island's landscape is preserved by law and it has lost few of its wild charms.

Some visitors may wish to take a van or horse drawn carriage straight to Dun Aonghasa, an Iron Age fort eight miles away on the western side of the island.

The fort's ruins lie in a semicircle around a 330-foot-high cliff, offering stunning views across the Atlantic and the southern Irish counties of Clare and Kerry.

Guides here tell us that the fort was likely used for Celtic ceremonies, possibly seen by the island's ancient inhabitants as the last possible place to say goodbye before souls were taken over the ocean to Tir na nOg, a mythical land where nobody grows old.

And now I will reveal what I think is the island's best-kept secret. Instead of following the tourist hordes on the main road back to Cill Ronain, keep to the right as you leave Dun Aonghasa and follow a coast road that offers breathtaking views across the sea and the Clare coastline in the distance.

You will soon arrive at the isolated fishing village of Gort na gCapall (the name means field of the horse), where there are no tourist facilities but an awe-inspiring view across Inis Mor's limestone landscape. Consult locally and walk a short distance through stone fields to the crashing waves on the coastline at Poll na bPeist (the worm hole), where the fury of the Atlantic gushes up through a cave like a fountain and falls back down again with the ebb and flow of the waves.

Fill your lungs with fresh air, listen to the pounding of the ocean and forget any talk of a fading culture. This is the Aran that enthralled Synge - savage, wild and achingly beautiful.

"We don't get many tourists this side of the island," said Gallagher, who lives in one of the houses closest to Poll na bPeist.

She looked across the gray stone fields where a cow lazily chewed grass. "But we don't want too many visitors," she said. "There'll be no flashy restaurants on this side of the island. That would just be a pity."

GETTING THERE: Aran Island Ferries depart from Rosamhil, 23 miles west of Galway city center. Expect an hour drive to get there from the city center. The company also operates a shuttle bus from the city center. Prices and times vary with the season. County Galway's Connemara Community Airport is not far from the ferry launching point and offers flights to the Arans for $57 (euro45) round-trip.

Visitors traveling north from Kerry, Clare and Cork can take a ferry from Doolin, County Clare. Check out a schedule of times and prices.

LODGING: Bed and breakfast accommodations are plentiful on the island. Expect to pay about $75 (euro60) for a double room in a family home.