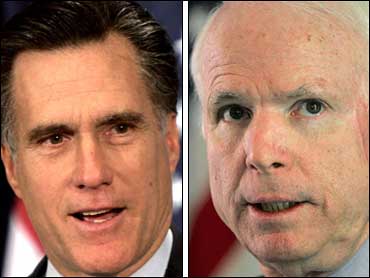 This column was written by Michelle Cottle.

Where Senator John McCain is concerned, the political chattering class seems to have lost its sense of humor. During a Monday conference call with journalists, McCain was asked by The New York Sun to comment on the fact that presidential opponent Mitt Romney had been talking smack about the immigration compromise McCain has co-sponsored in the Senate. McCain offered up this rejoinder regarding Romney's stance: "[M]aybe I should wait a couple of weeks and see if it changes, because it's changed in less than a year from his position before. And maybe his solution will be to get out his small-varmint gun and drive those Guatemalans off his lawn."

Hysterical, right? Not to mention smack-dab on target. In just a couple of sentences, McCain managed to tweak Romney for not only his reputation as a finger-in-the-wind pol, but also his absurd posturing as a hunting enthusiast, as well as his admission that, while a fierce opponent of illegal immigration, he may not always have been super vigilant about ensuring that all those swarthy, Spanish-speaking guys trimming his hedges each week had the proper documentation.

But McCain's cheeky riposte didn't provoke giggles so much as arched eyebrows, as media types promptly began buzzing about how this quip was yet further evidence of the nasty tempered thin-skinnedness fueling the McCain-is-too-crabby-and-maybe-even-too-unbalanced-to-be-president concerns that surfaced in 2000. In the first paragraph of its piece about the emerging McCain-Romney feud, The New York Times marveled at McCain's "acid" response. The Politico, meanwhile, used the episode as an occasion for an entire piece about the political risks of McCain's "barbs." And multiple folks noted how this is precisely the type of short-fused pique that helped derail McCain's 2000 bid.

You gotta be kidding me. When did the political world get so sensitive that a much-deserved, dead-on joke about a competitor's shameless, blatant, patently dishonest opportunism became a sign of an unbalanced temperament?

Don't misunderstand: There's ample evidence that McCain can be quick-tempered, thin-skinned — even gratuitously mean. No matter how miffed he got during the 2000 primaries, calling Pat Robertson and Jerry Falwell "forces of evil" was a major political misstep. Nor has the senator spent the subsequent seven years working on his impulse control. Just this week, when Senator John Cornyn accused him of having "parachute[d]" in from the campaign trail after all the tough work had been completed on the immigration bill, McCain should have come up with a more elegant retort than "f--k you."

That said, it's a bit of a stretch to classify McCain's poke at Romney as an indication of ill temper or short temper or distemper. It's not like McCain was snarling or shouting or even growling when he made his joke — a joke that sounded, in fact, less like an unfiltered, off-the-cuff snark than a premeditated zinger he had been waiting to trot out whenever opportunity came knocking. In fact, having gone back and listened to the call (helpfully posted by the Sun), I take issue with the characterization of his tone as acidic. Did the guy sound unhappy? Maybe. Then again, he always sounds a bit down in the mouth these days, which is part of why the press no longer loves him. But he didn't strike me as acerbic or snippy. He even gave a little chuckle after his remark — something that went unmentioned in the post-quip analyses I saw.

Part of the objection seems to be that McCain was taking a personal swipe at Romney. (You know how we Beltway types hate the politics of personal destruction.) Kinda — but not really. For starters, McCain was specifically asked to comment on Romney's criticisms (a point the Times didn't bother to make clear). It ain't like he, apropos of nothing, decided to gig the governor. More to the point, McCain wasn't taking a shot at some random aspect of Romney's character — like his religion or his hair. He was humorously spotlighting the reality that seriously engaging Romney on the substantive points of immigration policy — or any policy — is something of a fool's errand, since the candidate's positions tell us far less about him than the fact that those positions could be totally different by next month, or next week, or tomorrow afternoon. It is not character assassination to point out that the distinguishing — and potentially most troubling — characteristic of Flip Flop Mitt isn't any particular policy prescription he holds so much as that he can't seem to hold onto one for more than a few days. In modern U.S. politics, it takes work to distinguish oneself as an exceptional opportunist. Romney has met that challenge. (Varmint hunting, my ass.)

Demonstrating an even more delicate sensibility, The Politico charged that McCain had "swiped" at his "old friend and colleague" Fred Thompson, about whom the Sun scribe had also inquired. Knowing what buddies the two men have long been, I admit I was intrigued — until I listened to McCain's remarks: "I'm a little disappointed in Fred, 'cause, again, he had a very — a different position not that long ago. But, since he's not a declared candidate, I think that Fred will be able to articulate his position." Easy there, Senator. No need to go nuclear on us. A "little disappointed in Fred"? How much gentler could McCain have been? (My bet is that Thompson's wife says much worse about the guy on a weekly basis.) What exactly should McCain have done: praised Thompson for having the balls to criticize his old friend's adherence to an immigration stance guaranteed to win him nothing but grief from the base voters he so desperately needs to win the nomination he so desperately desires? Maybe next time McCain should offer to lick the boots of whichever pals line up to kick him.

None of which is to argue for McCain. It may well be that the guy is indeed too crabby/crazy/old to run the country. But I do think the episode tells us far less about the Arizona senator's temperament than about the infinitely rougher news environment he faces this time around. The negative storylines on McCain have already been drawn up. Once that happens, the chattering class will reach and leap and stretch to make even the most tentatively applicable action or statement fit the narrative. To survive, Senator Straight Talk may find himself having to play it straighter and straighter as this campaign rolls on, while Flip Flop Mitt winds up having the last laugh.

By Michelle Cottle
If you like this article, go to www.tnr.com, which breaks down today's top stories and offers nearly 100 years of news, opinion and analysis