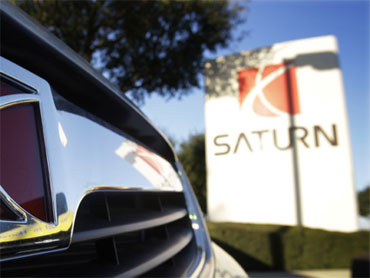 (AP Photo/Eric Gay)
General Motors, in what amounts to a fire-sale, is offering dealers generous packages to unload their inventory of discontinued brands Saturn and Pontiac, according to a Wall Street Journal report ($) Tuesday.

Under the offer, GM will give dealers $7,000 for every Saturn or Pontiac – brands slated to be shelved along with Saab and Hummer – they essentially sell to themselves.

The cars will be moved off the lot to join service-vehicle or rental-vehicle fleets operated by the dealers, where they can be sold for a more attractive price, according to the report. But the dealers will have to market the cars as used since they are technically the vehicles' first owners.

At the end of the day, buyers could see prices slashed on these cars by as much as 46 percent. But, as the report notes, buyers will face certain risks: future resale value might be hurt by the fact that it was bought as a used car. And there may be reluctance to purchase a car from an "orphan" brand, even though GM has said it will honor existing warranties.

The offer, which is good until Jan. 4, will cost the automaker a hefty sum, though it won't disclose the exact amount.

According to Ward's Auto Reports, 14,500 new Saturns and Pontiacs filled dealerships at the beginning of December – about two or three months worth of inventory.

Car data service Edmunds expects GM to sell 3,500 Saturns and 6,800 Pontiacs in the month, which would leave more than 4,000 cars on the lots – cars GM is desperate to get rid of.

As part of its government-sponsored reorganization, GM will consolidate their brands to Chevrolet, Buick, Cadillac and GMC.