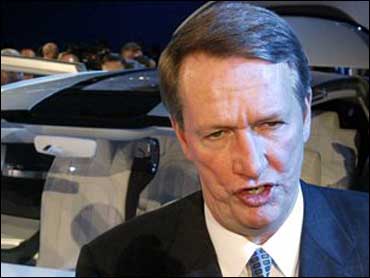 General Motors Corp. Chairman and CEO Rick Wagoner told employees Thursday that the world's largest automaker has no plans to file for bankruptcy despite heavy losses in its North American division and the threat of a strike at Delphi Corp., its major supplier. GM shares climbed more than 6 percent, bouncing back from their lowest level in 18 years.

"I'd like to just set the record straight here and now: there is absolutely no plan, strategy or intention for GM to file for bankruptcy," Wagoner said in a letter to employees, which was posted on an internal Web site.

Wagoner said GM has a clearly defined turnaround plan and "a robust balance sheet," with $19 billion in cash and $16 billion in assets in a trust fund for retiree health care.

"The large losses at GM North America are unsustainable, for sure, and require a comprehensive strategy to address them... a stategy that must be implemented promptly and effectively, to get our U.S. business profitable again," Wagoner said.

But Wagoner's strategy isn't satisfying everyone, and some analysts say investors could soon run out of patience with Wagoner and other top executives.

"If the company continues to go south the way GM is doing, is does raise questions about the confidence the board has in these people," said Gerald Meyers, the former chairman of American Motors Corp. who now teaches at the University of Michigan. "I know they are dealing as best they can but it's just awful."

Among the investors who could call for a change is billionaire Kirk Kerkorian, who owns a 9.9 percent stake in GM. So far, Kerkorian hasn't acquired a seat on GM's board, even though the value of his investment has dropped substantially this year. For example, the 18.9 million GM shares Kerkorian purchased in June are now worth $161 million less than the $585 million he paid for them.

A message was left with a spokeswoman for Kerkorian.