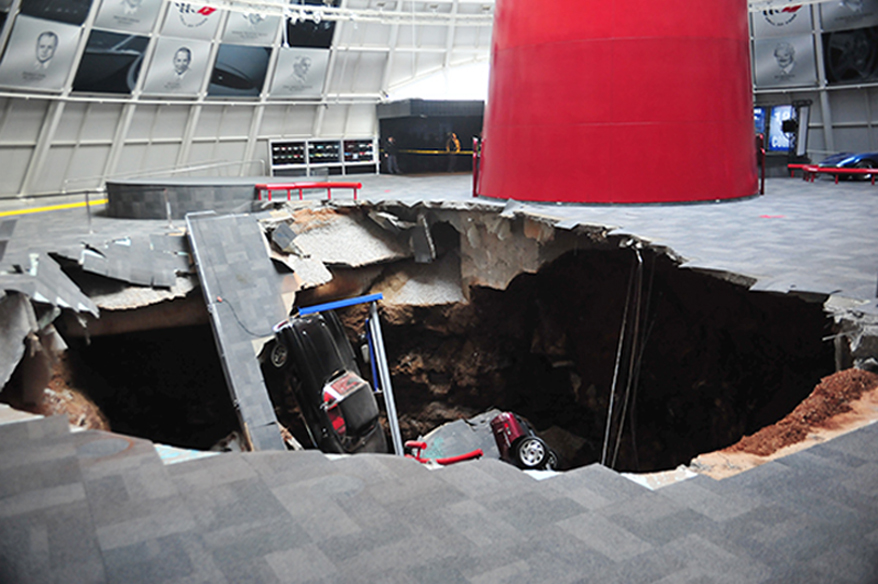 What Mother Earth devoured, Chevrolet plans to resurrect. The carmaker said Thursday it will oversee restoration of the classic cars swallowed by a huge sinkhole beneath the National Corvette Museum in Kentucky.

The cars were consumed when the earth opened up early Wednesday beneath a display area when the museum in Bowling Green, Ky., was closed. No injuries were reported. The museum was open Thursday except for the area where the sinkhole occurred.

Mark Reuss, GM's head of global product development, said the damaged vehicles rank as "some of the most significant in automotive history."

Just how the cars will be pulled out of the ground remains to be seen, said museum executive director Wendell Strode. The local fire department estimated the hole is about 40 feet across and 25 to 30 feet deep. The hole opened beneath part of the museum's domed section.

Chevrolet spokesman Monte Doran said some of the cars look to be in good shape, while others are buried in rubble.

"It will likely be several weeks until we can get the cars out and assessed," he said.

The GM Design team has helped restore other historic cars, but the Corvette project looks to be its biggest, he said.

"These Corvettes are part of our history, and they want them restored properly," Strode said. "We're thrilled they're doing this."

The cars looked like toys as they plunged into the hole, piled in a heap amid dirt and concrete fragments. The museum owns six of the cars while two - a 1993 ZR-1 Spyder and a 2009 ZR1 Blue Devil - are on loan from General Motors.

Pictures of the sinkhole showed a collapsed section of floor with multiple cars visible inside the hole. A few feet away, other Corvettes sat undamaged. They were later removed from the damaged area.

Sinkholes are common in the Bowling Green area, which sits in the midst of the state's largest karst region, where many of Kentucky's largest and deepest caves run underground.

The damaged cars were insured, but the coverage likely won't fully cover all the restoration costs, Strode said.

Once again, GM is stepping forward to help.

The first task is to stabilize what's inside the sinkhole and near it, Strode said. That could take about 10 days, he said. Then will come the extraction by crane, but the timetable hasn't been determined, he said.

The museum also has insurance coverage for damage to the structure.

A construction management firm has been hired to oversee the project, and engineering teams have also been brought in.

The goal is to have the structural repairs done in time for the museum's Corvette Caravan in late August, a celebration marking the museum's 20th anniversary. Thousands of Corvette enthusiasts are expected to converge on the museum in their models of the classic American sports car.

"Folks, if they hadn't been familiar with it, they may never be aware anything had gone wrong," Strode said. "It's going to look that good."

Nikki Haley to announce 2024 presidential run on Feb. 15
Thanks for reading CBS NEWS.
Create your free account or log in
for more features.
View CBS News In
CBS News App Open
Chrome Safari Continue
Be the first to know
Get browser notifications for breaking news, live events, and exclusive reporting.