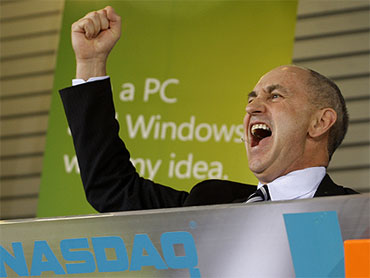 If the economy cooperates and auto sales recover a bit, General Motors Co. has a reasonable chance of turning a full-year profit in 2010, its new chief financial officer said Wednesday.

Former Microsoft Corp. CFO Chris Liddell, at his first meeting with reporters in Detroit, said the automaker is making money in Brazil and China, in the middle in North America and struggling in Europe.

"Relative to where we were a couple of years ago, that's enormous progress," he said in a conference room at GM's downtown Detroit headquarters.

A full-year profit for GM, which left bankruptcy protection in July, would be the company's first since 2004 when it made $2.7 billion. It has posted more than $88 billion in losses since then.

Liddell also said it's possible that GM will sell shares to the public in the second half of 2010. But he wouldn't set a timetable because GM must be making money, auto sales and the economy have to recover and the financial markets must be receptive.

GM also has to be selling its cars and trucks well within a recovering market, he said.

"It's impossible to sit here in March and say when all those factors are going to come together," Liddell said.

GM has received $52 billion in U.S. government aid, and Liddell said he would like to repay the $6.7 billion loan portion of the aid before June.

Liddell would not predict how much of the remainder would be repaid from the stock offering, but said it likely would take years for the government to divest itself of its 61 percent share of the automaker.

Liddell, 51, left his job at Microsoft with aspirations of becoming a CEO. New GM CEO Ed Whitacre Jr. said Liddell would be a candidate for the top job, but that was before Whitacre took the post himself.

Liddell said his new job is a challenge and wouldn't say much about whether he'd like to succeed Whitacre. He added he had other opportunities that paid more and would have been less difficult, but he was attracted by the challenge and importance of helping to resurrect GM, which he said affects the lives of millions of people.

"Other than that, it was an extremely rational decision," he joked.

He also said the automaker's financial operations are not as bad as characterized by Steven Rattner, the former head of the government's auto task force.

Rattner said in an October magazine article about the task force that GM had "perhaps the weakest finance operation any of us had ever seen in a major company."

But Liddell said he has found very good people in GM's financial operations, and he sees no need to rebuild the team from scratch.

Liddell said he drove a Ferrari to work while at Microsoft, and now is sampling all of GM's vehicles. He said he always has read automotive magazines and loved cars.

GM's accountants are getting ready to report 2009 and first-quarter earnings at the end of March using "fresh start" accounting from the time it exited bankruptcy protection as a new company. Liddell said that's been a huge amount of work, but is moving on schedule.