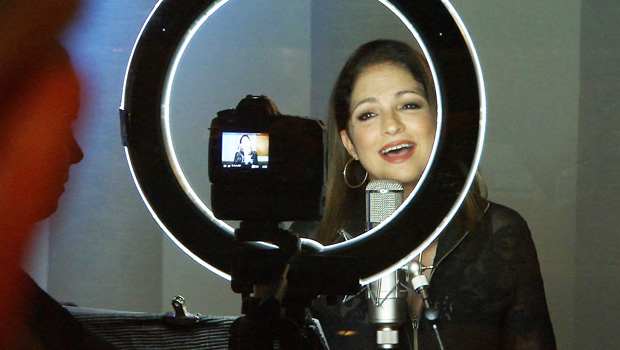 The 1987 hit "Anything for You" by the legendary Gloria Estefan is now ON BROADWAY. A new musical based on her life is currently in previews. Her path to center stage wasn't always an easy one, as she tells our Lee Cowan:

Back in the '80s, few knew what "Latin crossover" really meant in music, until this happened:

Gloria Estefan and the Miami Sound Machine became one of the decade's signature sounds.

It's no easy feat to make the conga more than just a wedding reception ritual. But Gloria did that, and much more.

She was polished, poppy, and popular. She's had more than 100 hits across the Billboard charts, brought home seven Grammys, and sold more than 100 million albums.

These days, Estefan is at a different stage in her life, literally. At 58 the Queen of Latin pop is seeing her life turned into a mega-watt Broadway musical, "On Your Feet."

"Is it what you expected?" Cowan asked.

She's played by actress Ana Villafañe, who bears an uncanny resemblance to Estefan, who recalled, "The minute she walked in, it was one of those 'movie moments,' like you know when they kid around in the movies, they say, 'That face! I must have that face!'"

They talked, and soon found out they had a lot more in common. She and Gloria both are Cuban-American, both grew up in Miami, and -- get this -- they both went to the very same Catholic high school (a few years apart, mind you).

"I remember Gloria coming to visit school," Villafañe said, "when you did the children's book 'Noel's Treasure Hunt.'"

"Yes! You were here for that?"

"Oh yes, and fun fact, I walked to where we are right now and there was a table and I was with my mom. You signed a book for me. I've never told you that!"

During a recent visit to their alma mater, the music made the years between them fade away. There they were, two products of immigrant families who had gone on to make it big.

"It really irks me when I hear someone say that the American Dream is dead, because that cannot be further from the truth," Estefan said. "This is one of the few countries in the world that doesn't put limitations on you. Only you put them on yourself. If you're willing to work hard, and persevere and follow your dreams and your passion and get ready to get a lot of no's and find your way around those no's, this is the dream place to do that."

Her partner in that dream is the only man she ever dated: her husband, multi-Grammy-winning producer Emilio Estefan.

He told Cowan the very first thing he noticed about Gloria was her eyes.

The play begins (as they did) as young Cuban immigrants fleeing the regime of Fidel Castro. Gloria and her family were among the first wave of exiles to arrive in Miami, settling into a tiny apartment.

It was thought at the time to be temporary. "You thought you were going to go home, right?" said Cowan.

"Yes, everybody thought it was going to be a matter of months. I still have my roundtrip ticket. Pan Am Airlines."

Gloria's father, who had fought in the Bay of Pigs invasion and later served in the U.S. Army in Vietnam, developed multiple sclerosis, and required round-the-clock care, which Gloria helped provide.

"I used to lock myself up in my bedroom when I was taking care of my dad, and just cry, through my music, because I wanted to be strong for my mom. I didn't want her to see the weight of the responsibility that I had."

But she rarely sang for anyone else -- until she happened to be at a Cuban wedding where Emilio was performing. "I walk in and there's a guy playing 'Do the Hustle' on the accordion," Gloria recalled.

Her mother talked her into getting on stage. Emilio was so impressed he asked her to join his struggling band, the Miami Latin Boys.

But Gloria said no way.

"I can't, my mother will kill me, she would kill me!" Gloria laughed.

"Even though she's the one who pushed you on stage?"

"Yeah, but she just pushed me up on stage for her own personal enjoyment, not to, like, launch me into a band all traipsing around town."

The rest, of course, is history.

Their unique blend of dance, salsa and pop took not only the Latin world by storm -- it took everyone by storm.

But one night, at their height of all their fame, it almost all came to a screeching halt. It was on a snowy Pennsylvania highway in March 1990. Their tour bus, on the way to a concert, was hit by an out-of-control tractor trailer.

She had broken her back. It took an excruciating hour-and-a-half for rescuers to arrive.

Cowan asked, "What were you thinking during that whole time on the bus?"

"I want her alive," Emilio said. "But then you start thinking, life is not fair."

She was told she might never walk again, let alone perform.

So she returned to the couple's home on Star Island in Miami, where Gloria started intense and painful physical therapy in their swimming pool. "Little by little, at least the muscles could be exercised and used," Gloria said. She underwent PT for six to seven hours a day. "I mean, I was on a mission."

After nearly a year of rehab, Emilio thought she was ready for her comeback -- a live performance at the American Music Awards. "If something goes wrong, she going to kill me!" Emilio laughed.

"That's my personality -- I'm a believer," Emilio said. "That's why we make such a great couple."

The song they wrote, "Coming Out of the Dark," said it all:

"It's literally a thank-you to everybody that helped me get through this very difficult time, and the fact that their prayers, their light, their good wishes carried me through this whole time, and I wanted them to hear it," Gloria said.

It's also the highpoint of the Broadway production, which isn't just about her music, or her physical battle; it's about the couple's cultural battle. The Estefans hope their fans will see their story of immigration as a truly American experience.

"Rather than seeing someone different on the stage, they're seeing themselves," Gloria said. "I'm hoping that they actually realize how much more similar we all are, than just merely celebrating our differences."

And in that, Gloria and Emilio Estefan show themselves to be true crossovers who did, in fact, get caught by the rhythm.

To watch a trailer for "On Your Feet" click on the video player below.