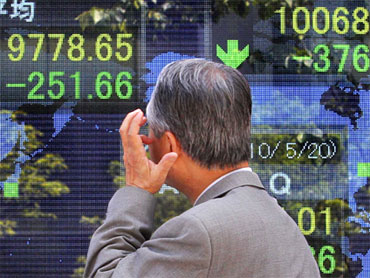 Hong Kong and South Korean stock exchanges were closed for a public holiday. Trading in Thailand has been suspended due to political turmoil.

Investors fear debt problems in countries like Greece and Portugal will spill over to other countries in Europe. That could then trigger a cascade of losses for big banks and in turn halt economic recovery in the U.S. and elsewhere.

"The danger is that the fear becomes self-fulfilling and disrupts the real economy and derails what's been a stronger than expected global economic recovery," said David Cohen, an economist with Action Economics in Singapore.

"The 2008 crisis in the U.S. showed how damaging it can be when investors become so fearful of counterparty risk, they simply flee to the safety of Treasurys," he said.

Japanese Finance Minister Naoto Kan told reporters Friday that he is closely monitoring currency markets and that excessive appreciation of the yen is undesirable, according to Kyodo news agency.

Oil prices resumed their swoon as concerns over the European economy had traders bailing out of energy commodities. Benchmark crude for July delivery was down $1.10 at $69.69 in electronic trading on the New York Mercantile Exchange.