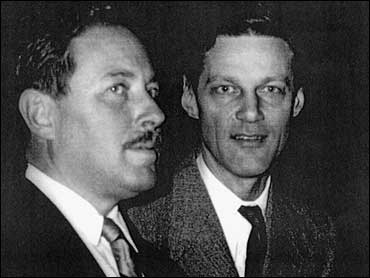 Tennessee Williams certainly would not recognize the apartment building he hated to live in as a young man in this Mississippi River city.

The famous playwright, who died in 1983, probably wanted to forget the place that would become an inspiration for the setting of his play, "The Glass Menagerie," a shabby apartment in 1930s St. Louis.

But today, Thomas Lanier "Tennessee" Williams, a Tony Award and Pulitzer Prize winner, who gained acclaim with Broadway plays such as "A Streetcar Named Desire" and "Cat on a Hot Tin Roof," might like his former apartment. The gutted space is being renovated into luxury condos, and the long-held claim that 4633 Westminster Place helped inspire the setting for "The Glass Menagerie" could fetch its owner, Mei Yang, some extra cash.

"They say I should sell this one for the most money," Yang, 52, said recently, standing in a third-floor bedroom where Williams lived from 1918 to 1922.

The pristine two-bedroom, two-bath units, with shiny, new hardwood floors, are nearing completion, and the selling price for each of the nine units starts at just under $220,000.

Williams described this place, his first home in St. Louis after moving here from Mississippi, as a "perpetually dim little apartment in a wilderness of brick and concrete."

A new jovial lighting scheme addresses that issue. Walls have been knocked down to make the nine condominiums feel more spacious and some units are painted in cool cream colors.

The businesswoman and designer who immigrated to the United States from Taiwan bought the building in St. Louis' Central West End more than three years ago. She didn't know when she closed on the deal that Williams once lived in one of the apartments.

When a school bus full of students parked in front of the brick building one day, a tour guide made the connection for Yang.

"The more I learned about him on the Internet, I thought, 'Wow,' " said Yang, who owns WinCon Design Group. "I feel like his spirit is with me in making it beautiful again. I feel so lucky."

Shortly after she bought the place, remodeling was slowed by problems with contractors, vandalism and stolen materials.

And making the historic apartment building, with its old electrical wiring, leaky pipes and rotted floors, took a lot of money and work, said Yang, who had European kitchens and bathrooms styled with marble, porcelain and granite trimmings put in.

"I've spent a fortune to just make the front door look beautiful again," she said. "The building was run down when I found it. I can say that."

Marvin Mueller owned what was long known as The Glass Menagerie Apartments for about five years until he sold it in 2000. The 74-year-old real estate investor said he considered restoring the three-story building.

"I would have spent a million dollars or more, easy," he said.

Real estate agents say properties with such a link to the past don't come on the market often. And for a buyer enthralled by theater and moved by the playwright's work, the condo could be a priceless dwelling.

Other famous writers, including T.S. Eliot and William S. Burroughs, have lived within blocks of each other over the years, giving the area the nickname "The Writer's Block."

Mueller is not so impressed.

"It's history, it's trendy, but it didn't make a lot of difference to me," he said. "I think there's much more impressive properties in the neighborhood."

The Central West End community has eye-catching, turn-of-the-century architecture and a cosmopolitan character. When the Williams family paid about $40 a month in rent here, the neighborhood was an "in" place to live, according to a surviving family member, and it remains that way today, with rent ranging from $700 to $2,000 for a two-bedroom apartment.

Many homes have a feel of luxury that's a magnet for the upper-middle class. A large park, wireless Internet cafes, restaurants and a sushi bar are around the block.

The Tennessee, as Yang has renamed the building, has 21st-century touches. Condos are wired for surround sound, designed for a hanging plasma TV and protected with high-tech security equipment.

Williams' brother, Dakin Williams, said every place his brother lived has become well-known in St. Louis. Although Dakin Williams was very young at the time, he said he didn't like the "gloomy" Westminster Place apartment either.

The 87-year-old, who now lives in a Collinsville, Ill., retirement community, said he remembers living in almost a dozen different homes with his brother. The Missouri Historical Society archives count twice as many places, including schools and other buildings, associated with the playwright.

Part of Tennessee Williams' disdain for the town he called "St. Pollution" was his unhappy childhood, including a rocky relationship with his father. Cornelius Williams could not accept his son being gay.

Not far away is another place where the family once lived, although the building on Enright Avenue has been torn down. It, too, had a fire escape that was likely the inspiration for the one in "The Glass Menagerie." Tom, the play's main character, who hopes to escape, would smoke cigarettes on the narrow steel balcony.

Henry Schvey, a Williams scholar at Washington University in St. Louis, said "The Glass Menagerie" is based on several different places, at least two of which had fire escapes.

"There's an accidental touch of poetic truth to the play," Schvey said. "The whole thing is about Tennessee's escape from the city and trying to find himself artistically."