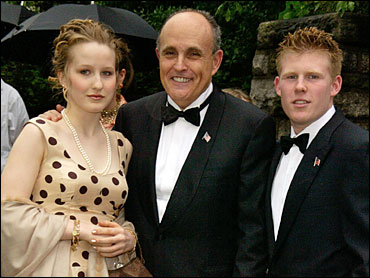 It doesn't look like Rudy Giuliani's two children will have a role in his presidential campaign. According to media reports, the GOP frontrunner's third marriage has alienated his son, Andrew, 21, and daughter, Caroline, 18, from their father.

Giuliani's 21-year-old son, Andrew, told The New York Times that he would be too busy working on his golf game to participate in his father's presidential campaign.

"There's obviously a little problem that exists between me and his wife," the younger Giuliani told the newspaper. "And we're trying to figure that out. But as of right now it's not working as well as we would like."

Giuliani's marriage to his third wife, Judith Nathan, followed his divorce from Donna Hanover, the mother of Andrew and Caroline.

In 2000, Giuliani announced during a live TV interview that he planned to divorce Hanover. She responded by publicly accusing Giuliani of adultery.

Caroline Giuliani has not spoken publicly, but the Times and New York's tabloid newspapers reported that she was also alienated from her father as a result of his marriage to Nathan.

The New York Daily News reported that Giuliani rarely spends time with his children and that he had failed to attend many important events in their lives, including Andrew's golf tournaments and Caroline's school plays.

Campaigning in Southern California on Monday, Giuliani asked for privacy to deal with the strained relationship with his children.

"My wife Judith is a very loving and caring ... mother and stepmother. She has done everything she can. The responsibility is mine," Giuliani said. "The more privacy I can have for my family, the better we are going to be able to deal with all these difficulties."

Andrew Giuliani is a sophomore at Duke and a member of the school's golf team. Caroline attends a private school in Manhattan. She will attend Harvard University in the fall.

Giuliani holds a huge lead in the polls over GOP presidential rival John McCain, but some political analysts believe the former New York mayor's estrangement from his children and other personal problems is bound to inflict political damage.

"This is just going to be one of a thousand cuts," Cook told the newspaper. "This will just sort of fit into a whole constellation of issues that work against someone winning a conservative party's nomination, a party that thinks of itself as a pro-family party. This just makes it really hard."