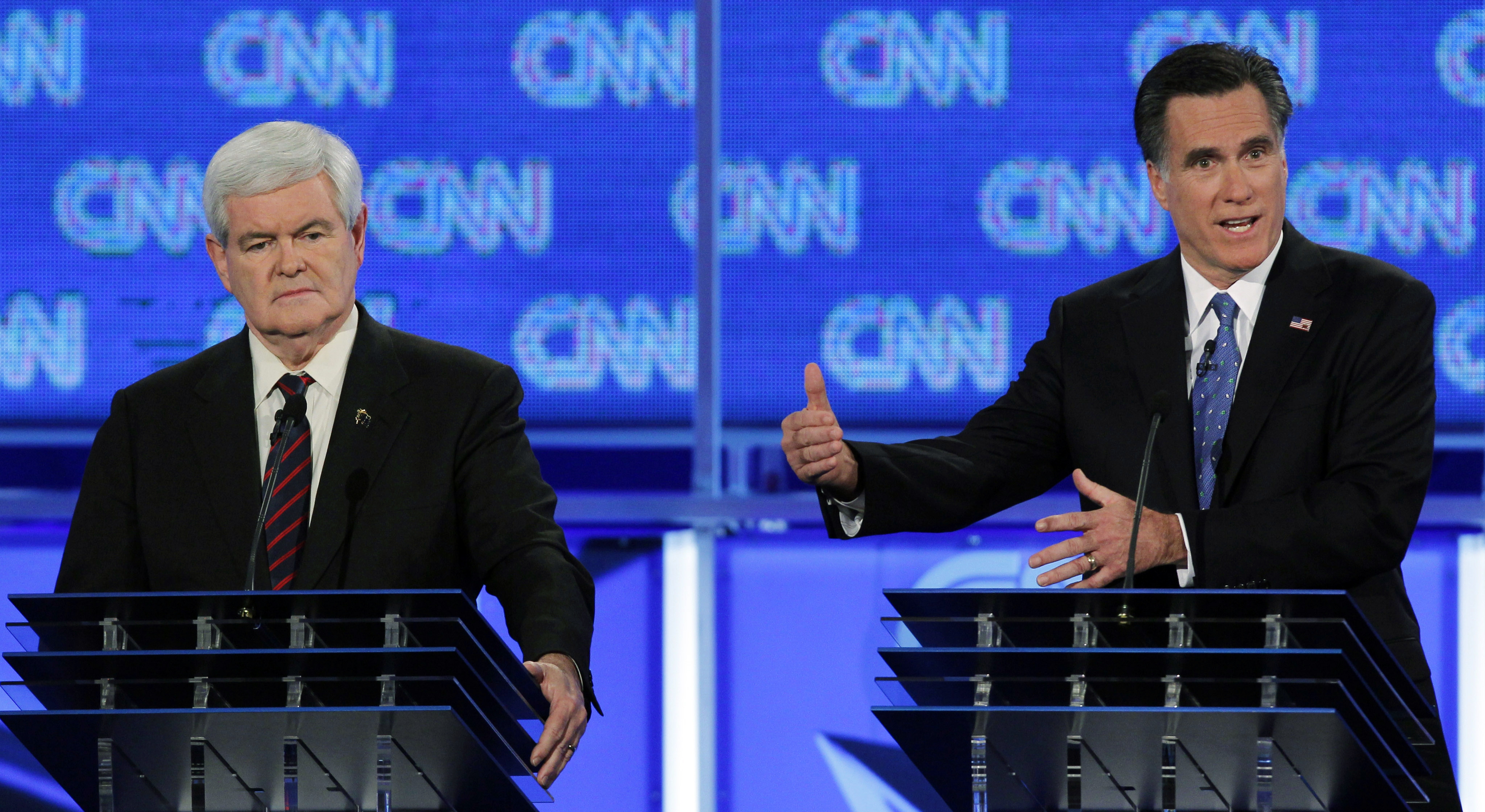 Right out of the gate in Thursday night's Republican debate, Mitt Romney and Newt Gingrich were at each other's throats over the issue of immigration, with Gingrich calling Romney the most "anti-immigrant" candidate and Romney calling that charge "repulsive."

On Wednesday, Newt Gingrich's campaign pulled a Spanish-language ad labeling Romney as anti-immigrant after Republican Sen. Marco Rubio of Florida complained it was "inflammatory." But when asked Thursday night if he stood by his charge that Romney is the most anti-immigrant candidate in the race, Gingrich said yes.

Gingrich charged that Romney's immigration plan would go after undocumented grandparents with families in the U.S.

"We're not going to walk in there and grab a grandmother out and then kick them out," Gingrich said. "You have to be realistic in your indignation."

Gingrich added that his position, by contrast, would be "bold" but "realistic." Immigration is a hot-button issue in Florida, which holds its primary on Tuesday.

Romney said it was "inexcusable" to characterize him as "anti-immigrant," pointing out that his father was born in Mexico.

Can Romney or Gingrich win over Latinos?Rubio to GOP candidates: Go easy on the rhetoric

"This is the type of over the top rhetoric that has characterized politics for too long," Romney said, earning applause. He said that Gingrich should apologize for such "highly charged epithets."

Romney has called for enforcement of immigration laws and has said he expects "self-deportation" among undocumented immigrants who can't find work. Gingrich has acknowledged that some "self-deportation" may occur, but has called for local citizen panels to consider whether undocumented immigrants should be allowed to earn legal residency if they have ties to the community, like established families.

"All I want to do is to allow the grandmother to be here legally with some rights to have residency but not citizenship, so that he or she can finish their life with dignity within the law," Gingrich said.

Romney added, "I'm not going around and rounding people up and deporting them... I'm not going to go find grandmothers and take them out of their homes and deport them."

Former Sen. Rick Santorum said he agreed with Romney that if undocumented immigrants were denied an opportunity to work, they would "self-deport."

"If you don't create an opportunity for people to work they will leave because they can't afford to say there," he said.

Rep. Ron Paul said that illegal immigration would be less of a problem in a better economy but said that the U.S. border should be better managed.

"The way we're handling our borders is actually hurting our economy because visitors have a hard time coming in," he said. "I think we need more resources, but where are the resources going to come from? I think we spend way too much time worrying about the border between Afghanistan and Pakistan, use some of those resources on our own border."

Florida Republican debate: Winners and LosersGingrich hints at making Marco Rubio VPGingrich, Romney hit each other over involvement in Fannie Mae and Freddie MacRomney tells Gingrich: I'd fire you for your moon proposalGingrich, Romney agree to blame the Palestinians, Obama for lack of progress in the peace process