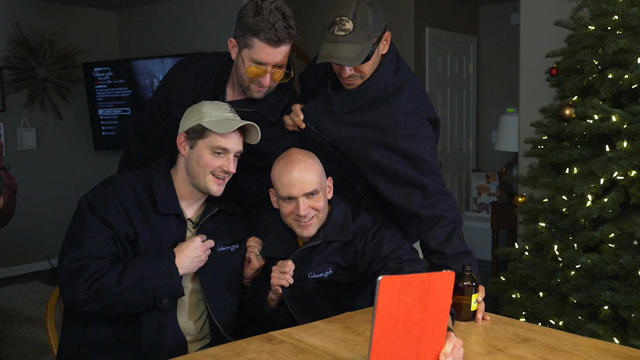 That may sound like cheers from a group of guys watching a football game. But they are binge-watching the revival of “Gilmore Girls,” reports CBS News correspondent Ben Tracy.

“I should acknowledge I have never seen a second of the ‘Gilmore Girls,’” Tracy admitted.

“Go (expletive) yourself,” Jesse said, laughing. ‘Get out. Get the shotgun, Donny. We’ve got to take care of this guy.”

“Why are you here?” John asked.

“Get me Charlie Rose!” joked Luke.

The only thing more surprising than their utter devotion to the show and its main characters, Rory and Lorelai, is how they got hooked on it in the first place.

“So I found season two. It was unopened in like some library in the middle of a base in Iraq,” Jesse recalled.

Jesse, Luke, Erik and John met as Marines. They were members of a sniper platoon deployed to Ramadi, Iraq in 2005.

During missions, they dodged explosive devices. Back on base, they watched “Gilmore Girls.”

“At least for me, Stars Hollow was the America I think we all thought – we all wished we were fighting for,” Erik said.

Stars Hollow is the fictional and idyllic town at the center of the show. It came to mean so much to them, Luke wrote a letter to the show’s creators, Amy Sherman-Palladino and her husband, Daniel.

“Part of the attraction is a simple case of contrasts. I live in a strict, macho, sometimes violent world that very often does not make sense,” Luke began to read from the letter, trying to swallow tears. “Stars Hollow, a town where Gilmore Girls takes place is pretty, it’s warm, friendly. And then there’s the simple human stories...”

Jesse grew emotional, taking off his glasses and covering his eyes.

“Relationship between parents and children, brothers and sisters, loves lost and found, and friends who are always there,” Luke read on, tearing up and laughing at the same time. “In the end, much of the entertainment is escapism. And for me and a few friends over here in Iraq, there’s no place we’d rather escape to. It reminds us of all the best parts of home.”

“There’s just something about that line in the context of this letter that just rings incredibly true,” said Amy. She has kept Luke’s letter for more than a decade.

“I have actually kept the letter in my various desks over the years, always. So it’s been very close to me,” she said.

The guys never forgot that the Palladinos tracked down their sniper unit and sent a care package to Iraq.

“And we open these boxes up and there are all four of these jackets,” Luke recalled.

“She did assure us that there were other men that were wearing these jackets,” Erik said, laughing.

This past week they flew from all over the country to watch the “Gilmore Girls” revival together. The jackets also made a comeback.

We figured it was the right time for another reunion, with a Facetime call with the Palladinos.

“We did not expect this at all,” Erik said.

“This was the furthest thing from my mind,” Erik said.

“Do you still have the jackets?” Daniel asked.

“They’re wearing them! Oh my God,” Amy said. “Are you OK with the shows? If you are unhappy, I’ll redo them.”

“No we love them. But if you wanted to redo them we’d watch them,” Erik said.

And that’s because this isn’t really about watching a TV show – it’s about spending time.