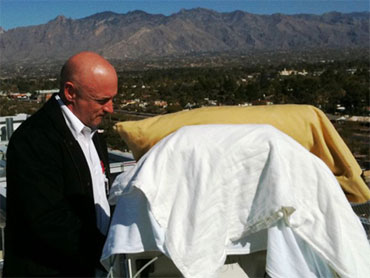 This story was written by staff writer David Brown

With the expected transfer Friday of Rep. Gabrielle Giffords (D-Ariz.) from a hospital in Tucson to a rehabilitation center in Houston, her treatment transitions from a heroic, high-tech fight to save her life to a long and arduous slog to help her brain rebuild itself.

The success of this second effort will depend on the extent of her brain damage (which is not yet fully determined), the skill of her therapists, personal effort and the unpredictable capacity of her brain to change.

Despite the use of terms like "miraculous" to describe Giffords's progress, numerous experts describe her survival and apparently good condition as an increasingly common outcome in brain-injured patients, thanks to aggressive surgery and meticulous care afterward.

The ability of the brain to compensate for damage by at least partly rewiring itself and assigning new tasks to undamaged regions is known as "neuroplasticity." It's one of the hottest topics in biology and an important one in medicine.

Because of insights from functional magnetic resonance imaging and other technologies, scientists now realize that brain reorganization after injury is far more common and extensive than previously thought. They also know that neuroplasticity depends to a great degree on experience - which is to say, what the brain is forced to do in the critical weeks and months after it is injured.

"There is a relationship between the amount of therapy you receive and the degree of recovery," said Maurizio Corbetta, a neurologist who runs a brain injury unit at the Rehabilitation Institute of St. Louis at Washington University. "This is particularly true in the first three to six months when the brain is reorganizing."

The most common cause of brain damage is not trauma but stroke (also the fourth-leading cause of death). Of the 3 million stroke survivors alive, 40 percent have persistent weakness and disability. Brains damaged by trauma rather than stroke seem to have more capacity to recover.

"One of the things about traumatic brain injury is that recovery can go on for an extended period of time," said Michael R. Yochelson, a neurologist at National Rehabilitation Hospital in Washington. "We leave the book open."

In Giffords's favor is the report that half of her brain - the right hemisphere - was spared major damage by the bullet that passed through her head, front to back, in the Jan. 8 shooting in Tucson. That surgeons quickly removed a piece of skull to relieve swelling and pressure almost certainly spared her further damage. Her intelligence and relative youth will help, too.

Use of muscles, especially those in the limbs, will be hardest to get back if the bullet destroyed the brain cells that control them or the bundles of nerve fibers that come out of them. The recovery of language is highly variable and can occur over years. Also amenable to rehabilitation are abstract thought, memory and emotion.

Two facts about brain anatomy help explain what may go on in Giffords's brain during the months of rehabilitation.

The first is that location matters in the brain, which is like a continent of regions, states, cities and neighborhoods. Hearing, smell and memory formation all have their own locations, different from where sexual arousal, hand movement and sight reside.

Even different aspects of a single sense are widely separated.

Consider a view of the brain with the forehead being the Pacific coast and the back of the head being the Atlantic coast. The region that controls the eyes tracking a bird in flight is as far from the region that actually sees the bird as Minnesota is from New Jersey. Furthermore, in the "New Jersey" region, at the back of the head, there's an area that receives information only about things appearing in the right-hand field of vision. Within it is a neighborhood that gets information only about things that move. In that neighborhood are avenues of cells firing only when the thing moves left to right on a downward diagonal path.

The second brain fact relevant to rehabilitation is the organ's "laterality."

The left hemisphere of the brain has capacities the right lacks. In more than 95 percent of people, that includes the ability to understand and produce language. (The right hemisphere, on the other hand, is much better at imagining three-dimensional information.) In addition to that right-left specialization, there's a general tendency for one side of the brain to sense or control things on the opposite side of the body: When something touches our right hand, the left side of the brain feels the sensation. When we move our left foot, the order comes from the right side of the brain.

Those two neuroanatomical facts govern rehabilitation in this way:

When an area with a specific function is destroyed, the brain first attempts to recruit nearby cells, which are often doing similar tasks, to change and perform the function of the destroyed cells.

If that's not possible, because the destroyed area is so large and the nearest surviving cells are, in fact, doing something completely unrelated, the analogous area on the other side of the brain - the opposite hemisphere - takes on some of the tasks, with varying success.

These two strategies - recruiting nearby tissue and recruiting the mirror-image area in the other hemisphere - have different success rates depending on what functions have been damaged by stroke or, in Giffords's case, by a projectile.

The control of muscles occurs in a region called the "motor cortex," which sits like a tiara across the middle of the brain. It is laid out as a distorted "map" of the human body, with many more nerve cells dedicated to working the hand, face and tongue muscles than the shoulder, leg or foot muscles.

When some of those cells are destroyed, ones that are nearby can take over some of the functions. If that's not possible, the brain turns to a strip of tissue just in front of the motor cortex. Normally that area is devoted to the more complex and abstract job of preparing for an intentional movement, rather than driving the muscles. But it can turn over some of its cells to do the latter if called on.

When all else fails, the brain can use the part of the motor cortex in the other hemisphere to drive the muscles that would normally be controlled by the damaged area. In Giffords's case, the undamaged right side of her brain would be asked to control the limbs on the right side of her body.

Curiously, both sides of the body are "represented" in the motor cortex of each hemisphere, but the cells are wired up to to control only the muscles on the opposite side of the body. Neuroscientists hope to one day have a "brain-machine interface" that can capture this trapped knowledge in the good hemisphere and direct it to the muscles controlled by the damaged one.

Reassignment and rewiring under certain circumstances may be more successful in rehabilitating language use.

Only in small children or the very rare adult can the right hemisphere fully take over language. For a good recovery, some of the language function on the left must survive.

Calling on the undamaged side of the brain appears to work even better for complicated activities such as watching and remembering a changing group of objects.

Recent research by Bradley Voytek and Robert T. Knight at the Helen Wills Neuroscience Institute at the University of California at Berkeley has shown that a damaged left frontal lobe can handle this kind of task as long as it's simple. But the harder the task gets, the more the brain turns to the right frontal lobe for help.

"What these studies show you is that the brain is moving things around," Knight said. "It is taking a piece of information and getting it to the part of the brain that can solve the problem."

Targeted rehab and hard effort are essential to maximizing all of this. That's what's behind "constraint-induced therapy" in which the patient's good limb is restrained, forcing use of the weak one - and driving neuroplasticity. It's also the basis for aggressive speech therapy, and the need for more of it.

"Patients need eight or nine hours of speech therapy a week, and typically they don't get that as outpatients," said Washington University's Corbetta. "That's why it's very important to supplement what you get in a clinic with home exercises and computer exercises."

Therapy is just beginning for even subtler functions that are less hard-wired than vision and movement and may be even more recoverable.

"The rehab world focuses on motor activity, but that's the hardest thing to fix," Knight said. "We are now seeing increasing interest in rehabilitation of more abstract things, such as how good a patient is in focusing attention, in problem solving, in 'executive control.'"
© 2011 The Washington Post. All rights reserved