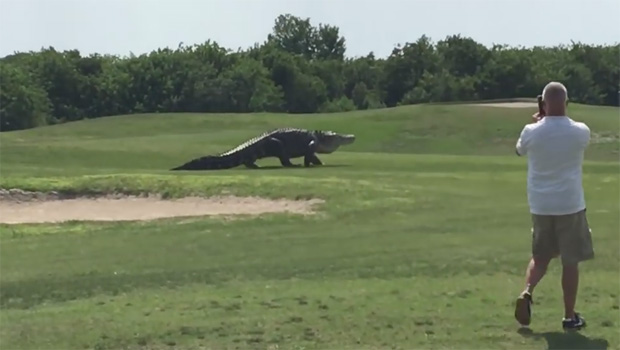 There are many alligators that inhabit the Buffalo Creek Golf Course in Palmetto, Fla., but the giant, 15-foot-gator that saunters across the fairway is now a mascot of sorts for the players, after the sighting was shared online.

The golfers who took this video were in disbelief: a giant alligator high up on its legs slowly walking across the golf course.

It's a sight so unreal that Chubbs (as the gator has become known) has become an internet phenomenon. The video that made him famous has been viewed more than 19 million times.

The staff believes this exceptionally large one lives in a reservoir. He crawls out and goes from pond to pond looking for food, or a potential mate.

But regulars at this course are unfazed.

"This is a great course because you see a lot of gators out here, and there's some real big ones," Mike Taketa told CBS News correspondent David Begnaud. "They'll be fighting and running across so it's a pretty interesting course. It's fun. We like watching those guys."

Ed Liedy said, "What most people don't realize is that these things go very short distances but they tire out quickly. [But] they're fast for like a short distance. Sort of like us old guys!"

Course manager Ken Powell says Chubbs has been a fixture on the fairway for years. He believes the gator is at least 15 feet long, and likely 40 or 50 years old.

Play doesn't stop when Chubbs comes out. If golfers hit a ball close to the reptile, they just drop another one, and play through.

"He's not a nuisance alligator," said Powell. "We have no plans to have anybody come and take him away. He's not hurting anybody."

Once considered endangered, alligators are still a federally-protected species. More than 1 million of the reptiles inhabit Florida. Fatal attacks on humans are rare -- only six have been recorded in the state in the last ten years, and that includes the killing of a two-year-old boy at Disney World back in June.

Alligator trapper Tim Geist says people should beware that the reptile can live in any body of freshwater. And no matter what the size, they should always be treated as a potential threat.

"A lot of the public doesn't understand, they don't know that when they feed an alligator, they're creating a monster," Geist said. "You know, you feed that alligator, he's going to keep coming back for more. Then he gets bigger and bigger and bigger. All of a sudden he sees you as a potential meal."

Chubbs may look like a monster, but the club believes as long as its patrons continue to leave the reptile alone, golfers and gators can peacefully coexist.

Injuries from rise of electric scooters

The Zapruder film: Capturing when the world changed in 26 seconds