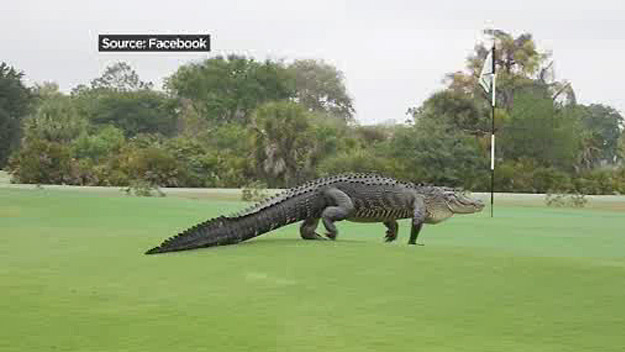 FORT LAUDERDALE, Fla. -- Alligators living on or around Florida golf courses is nothing new, but one gator has gone viral after it was caught on camera ambling through a golf course.

Charles Helms was with a friend at Buffalo Creek Golf Club in Palmetto when he spotted what appeared to be a 14 to 15 foot gator casually strolling across the course.

He immediately pulled out his phone and began recording it, CBS Miami reported.

"That is the biggest freakin' alligator I have ever seen in my life," a man can be heard saying on the recording.

"You've got to be kidding me," another voice said.

"I think that's two guys in an alligator suit," said the first voice, who adds, "That's a monster."

Helms posted the video on his Facebook page on May 25 and it blew up from there.

Golf.com was one of many media outlets that took the video and posted it on YouTube.

The massive alligator is apparently a regular at the course.

Buffalo Creek employee Wendy Schofield told a local news station, "He doesn't bother anybody and they don't bother him, he's like a mascot for the course."