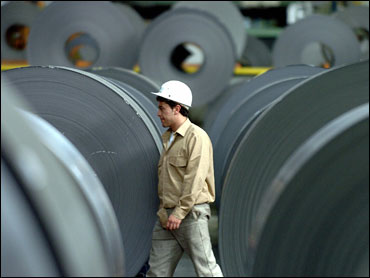 The plant — set to open in 2010 and employ as many as 2,700 workers when fully operational — will be near Mount Vernon on the Tombigbee River in north Mobile County.

The company was lured by several tax breaks and a $400 million incentives package approved by the Legislature.

In a statement Friday morning, Gov. Bob Riley said a "project this size, with this amount of economic impact, comes along perhaps once in a generation."

The Duesseldorf-based company chose Alabama over Louisiana, which also had offered tax breaks.

Louisiana Gov. Kathleen Blanco said it was a "tremendous honor" to be one of two finalists among 20 states that had bid for the project.

"Our success with this project demonstrates Louisiana has established a stronghold in the global economy and can successfully compete for world-class projects," she said in a statement.

The Alabama plant would be ThyssenKrupp's first steelmaking operation in the United States.

The plant would be "an integral part of the company's plan to increase growth in the steel and stainless steel division in North America and Europe," supervisory board chairman Ekkehard Schulz said in a statement.

The company said that once the plant is up and running, it could create as many as 38,000 new jobs related to the mill, from suppliers to transportation to dining and entertainment.

In a statement, Bob Soulliere, president and CEO of ThyssenKrupp Steel and Stainless USA, said factors in choosing Alabama included "logistical considerations of the company's supply chain from Brazil to our projected customers; operating costs such as electricity and labor; and site specific capital expenditures."

The facility will have an annual capacity of 4.1 million metric tons of carbon steel end products.