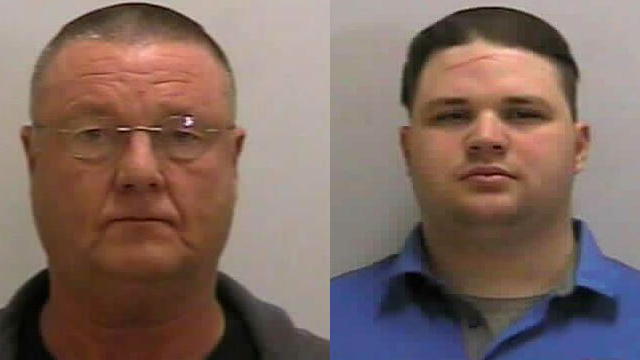 WHITE, Ga. -- A north Georgia police chief and an officer have been arrested and accused of arresting people on fake charges and then reducing the charges to collect fines, authorities said Wednesday.

He said the allegations stem from a period between December 2011 and April 2015. The arrests follow an investigation that was initiated by GBI in October 2015 at the request of the Bartow County District Attorney's Office, CBS affiliate WGCL reported.

Ramsey said that one woman was arrested in 2012 on a charge of felony deposit account fraud, a crime Ramsey adds she didn't commit. According to Ramsey, the woman had been told previously to accept a disorderly conduct citation, pay a $1,000 fine and authorities then would not pursue felony state charges.

He said another woman was arrested last year on a charge of committing cruelty to children. Ramsey said that woman also did not commit the crime but that an arrest warrant had been sworn out for her. Ramsey said the woman's husband was told the family could accept a disorderly conduct citation, pay a $1,000 fine, and police in turn would not pursue felony state warrants against the woman on the charge.

Ramsey didn't immediately return email questions and other details weren't in his statement.

The arrests come after the FBI and Georgia investigators executed search warrants in January at the White Police Department and White City Hall in the state's northeast region.

King and Scheff are being held at a county jail. It's unclear if they have attorneys.