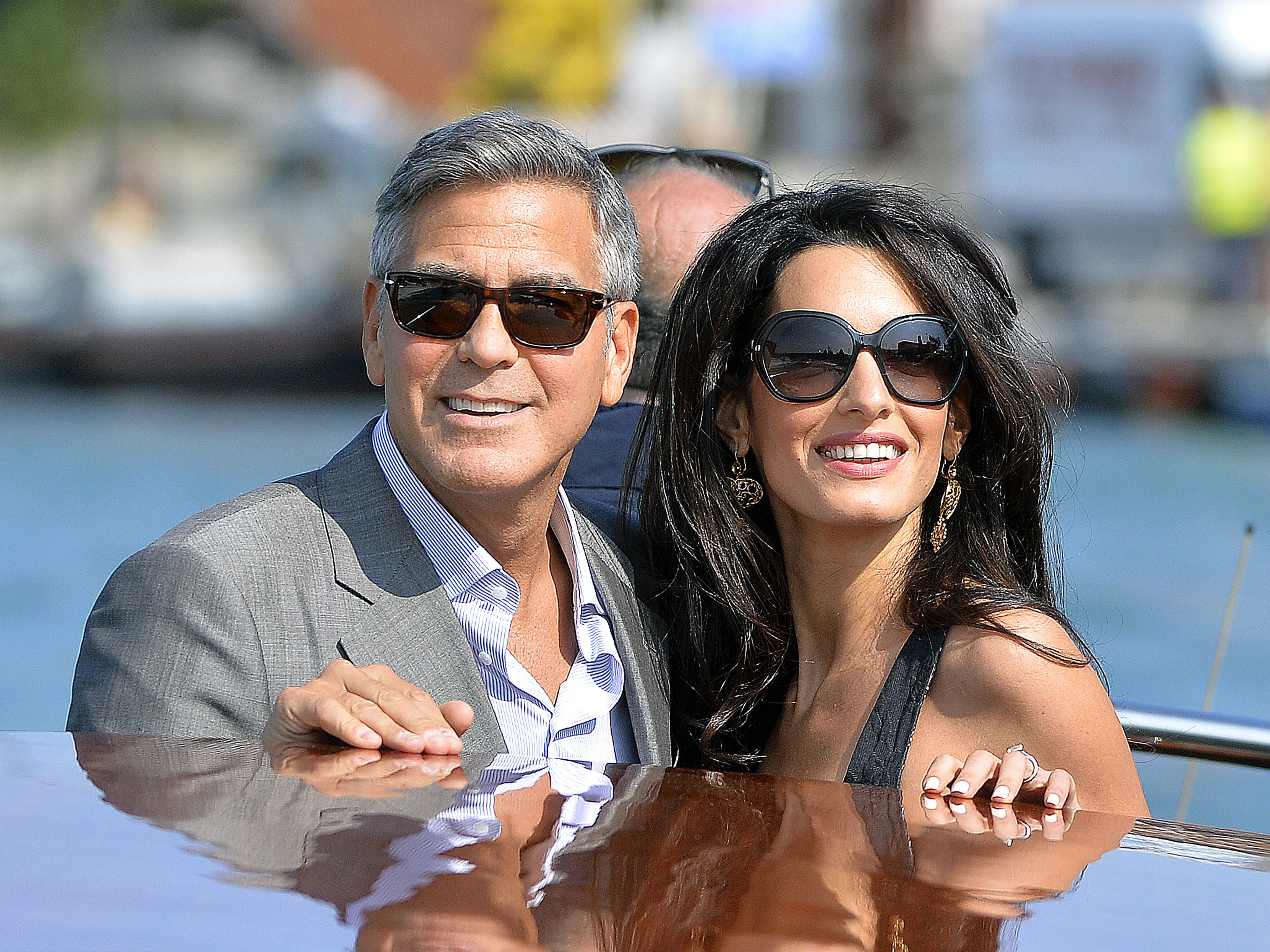 George Clooney and his fiancee, Amal Alamuddin, have arrived in Venice for their weekend wedding extravaganza.

The couple touched down Friday and were brought via water taxi to the luxury Cipriani Hotel.

They were met by Clooney's regular water-taxi driver, who piloted the group down the scenic route along the picturesque Grand Canal lined by stunning palazzi, including the one where the couple is to be married in a civil ceremony on Monday.

Clooney and his bride stood outside during the water-taxi ride, his arm comfortably around her as they were conveyed along the most famous of Venice's canals on a boat fittingly named ''Amore." He waved to well-wishers as they passed under the famed Rialto Bridge.

The water journey ended at the luxury Cipriani Hotel, Clooney's usual residence when in Venice, on an island opposite St. Mark's Square. Its 24 rooms are fully booked for the weekend. The seven-star hotel was built in 1550.

Clooney, 53, and Alamuddin, 36, have not publicly divulged details of the celebrations -- leaving plenty open to speculation.

A reporter saw a distinct hexagonal box that Alamuddin was photographed carrying through a Milan airport on Thursday arrive by water taxi at the Aman Hotel overlooking the Grand Canal, rumored to be the venue of one of the weekend festivities. The wedding veil, perhaps? And the million dollar question: Who designed the dress she will wear?

Giorgio Armani said during Milan Fashion Week that the groom would be wearing Armani. Clooney is a long-time friend of the designer and has in the past been a front-row guest at his menswear shows. And an Armani suit bag arrived with Clooney, among two vans of luggage, in Venice.

Venice city officials have announced the closure of a 50-meter (yard) length of pedestrian way along the Grand Canal where the 16th-century Cavalli Palace is located for two hours on Monday for the Clooney nuptials. Media have speculated that the couple will have two ceremonies - one on Saturday followed by a civil ceremony Monday.

The arrival of other celebrities in Venice on Friday indicated star-studded festivities were in the making. Those spotted included Clooney's cousin Miguel Ferrer, Matt Damon, Ellen Barkin, Anna Wintour and Richard Kind.

Clooney has expressed bemusement at the level of interest in his love life over the years. And it's unlikely to stop with marriage.

The couple, who reportedly started dating in 2013, got engaged in April. Alamuddin's law firm confirmed the news: "The barristers and staff of Doughty Street Chambers offer their best wishes and congratulations to Ms Amal Alamuddin, a member of Chambers, and Mr George Clooney on their engagement to be married."

While accepting an award recently in Italy, Clooney stood at the podium and expressed his love for Alamuddin, saying: "In closing, I would just like to say to my bride-to-be Amal, that I love you very much, and I can't wait to be your husband."

Clooney previously married actress Talia Balsam in 1989. The couple got divorced in 1993. This will be Alamuddin's first marriage.