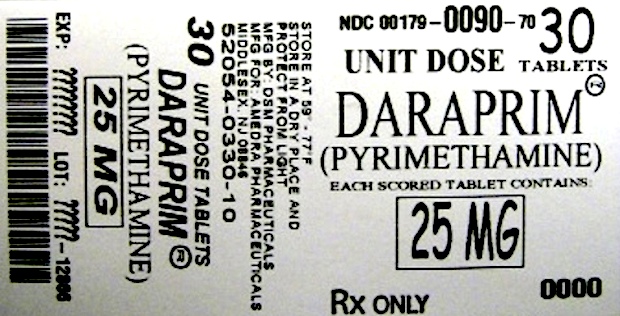 A dramatic increase in the price of a decades-old drug called Daraprim has sparked protest among infectious disease doctors and advocates.

The rights to Daraprim were purchased in August by a new company, Turing Pharmaceuticals, which promptly increased the price from $13.50 per tablet to $750 per tablet -- a 5,000 percent jump -- the New York Times reported.

Daraprim, the common name for the drug pyrimethamine, is the only medication for treating toxoplasmosis, an infection contracted from cat parasites that can cause birth defects. It is also used as a co-treatment for HIV infections, some cancers and malaria.

Infectious disease physicians and advocates wrote a letter to the company urging them to reconsider the price increase. "Under the current pricing structure, it is estimated that the annual cost of treatment for toxoplasmosis, for the pyrimethamine component alone, will be $336,000 for patients who weigh less than 60 kilograms [132 pounds] and $634,500 for patients who weigh more than 60 kilograms," the letter said. "This cost is unjustifiable for the medically vulnerable patient population in need of this medication and unsustainable for the health care system."

The jump in cost is particularly surprising because Daraprim is an off-patent drug developed more than 60 years ago.

Turing Pharmaceuticals CEO Martin Shkreli told "CBS This Morning" the drug is not overpriced compared to its peers. "The drug was unprofitable at the former price... at this price it's a reasonable profit, not excessive at all," Shkreli said. He claimed the money would allow the company to develop newer, better drugs.

"Our first and primary stakeholder is patients," he said.

Generic drug-makers keep their research and spending costs lower because their drugs are already developed. They benefit from FDA allowances for faster and less rigorous approvals introduced in the Hatch-Waxman Act of 1984. The law was meant to provide both protection for the original makers of drugs to recoup their costs and, then, to help bring more generic substitutes to market for drugs that are no longer under patents.

Daraprim is part of a recent trend in increasing costs among older pharmaceuticals, which has roused the attention of Congress.

The reasons behind increasing generic drug prices are not related to research or development costs, as new drugs would be; instead, experts say it's more about economics.

In some cases, the raw materials to make the molecules are in short supply because the drugs were developed years ago or the company has created a unique formulation that no one else has, both of which allow the companies to raise prices. In other cases, more insured patients under the Affordable Care Act have increased demand.

But very commonly, as with Daraprim, the price increase is triggered by one company buying another or purchasing the rights to the drug and resetting the prices because they now have a monopoly on the most common treatment for a given disease.

"In the case for drugs for rare diseases where the market is small, you're more likely to see this behavior because the market is not large enough to sustain a large number of producers," Frank Lichtenberg, a professor in the Healthcare and Pharmaceutical Management Program at Columbia Business School, told CBS News. "Therefore an incumbent can try to exploit its market power."

The companies offer discounts for patients who cannot afford the medication, as required for public health care payers. But some medical providers say applying for the discount can be complicated.

"Manufacturers of generic drugs that legally obtain a market monopoly are free to unilaterally raise the prices of their products," the authors of a New England Journal of Medicine editorial on rising generic prescription costs wrote last year. "There is little that individual consumers can do. Some drug companies...offer assistance programs for indigent patients, but these programs often have complicated enrollment processes, and they do not offer an effective general safety net."

Generic drug products were dispensed for 77 to 85 percent of all outpatient prescriptions in 2012 and 2013, according to the report presented to the Senate last year by lead researcher Stephen W. Schondelmeyer, a professor at the University of Minnesota. Many of those drugs are for common conditions, not the more rare infectious diseases for which there is only one known medication.

But Lichtenberg says for more common drugs like heart medications, cholesterol drugs and others that have a very large market, especially among seniors, it won't be possible to raise drug prices that high because there's too much competition. He believes the sharp price increases by makers of the rare disease therapies could be calculated short-run profit-making, because they know the market won't sustain the inflated generic drug prices indefinitely, even if they have the only drug for a specific condition.

"If you think they are making obscene profit, there's reason to believe this could attract other generic firms, let's say in India where there's a very large generic industry," Lichtenberg said. "That's not going to happen overnight, but it could be that these companies see the possibility of a short-ride windfall."

Editor's note: This story has been corrected to reflect that Daraprim is not a generic drug; it is no longer under patent but there is no generic on the market.