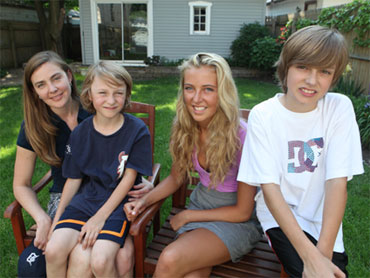 They aren't even out of grade school. But already, people are trying to name the youngest up-and-coming generation, and figure out who they might be and how they might be different from their predecessors.

At a loss for something more original, many call them Generation Z, because they follow Generations X and Y.

They've also been referred to as Generation Net or "iGen," since they've never known a world without the Internet.

That's the one point most everyone can agree on - that they are the tech-savviest generation of all time, so much so that even toddlers can maneuver their way through YouTube and some first-graders are able to put together a PowerPoint presentation for class.

But beyond that, who are they, really?

Most people agree it's just too early to know for sure. But that hasn't stopped marketers from trying to figure out this young crowd of consumers. Or employers from attempting to prepare for them in the workplace.

Parents, too - many of them Gen Xers - are weighing in, saying they are raising a different brand of kid than baby boomers did.

"I would like to think that ideally, and this might be a bit naive, Gen Xers are a bit more freethinking and not necessarily as compelled to keep up with the Joneses," says Kris Sonnenberg, a teacher in Chicago and 38-year-old mother of three children, ages 8, 12 and 17.

Many parents also think the recession will play a role in shaping who their kids are, and perhaps make them less "entitled," a label that - fair or not - has been slapped frequently on Generation Y, also known as the "millennials."

"We're not afraid to say money's tight, so I feel like our kids are going to have that sense long-term," says Andrew Egbert, a 41-year-old dad who works in manufacturing in Greensboro, N.C. He has a son in fifth grade and a daughter who's a first-grader.

OK, so, let's take a look at the picture that's emerging of Gen Z, for what it's worth. They're young - roughly age 12 or younger.

Generational expert Neil Howe says determining who these youngsters are still is very much a work in progress.

"But there are hints from history," he says.

Howe, who coined the term "millennials," says 2008 may turn out to be one year with a big influence on this generation, due to both the recession and the election of the nation's first black president.

He is calling them the "homelanders" because they are growing up in a time of "greater public urgency and emergency, both at home and around the world."

For that reason, he speculates they could be a new version of the so-called Silent Generation, the group that grew up in the Depression era, who saw the country through World War II and who birthed the baby boomers.

That elder generation was pegged as hardworking and anything but entitled.

"It won't be taken for granted that prosperity is guaranteed," says Reid, a managing partner at Global Novations, a firm that helps corporations develop and attract workers and understand generational differences.

Because they're so hooked into screens of all kinds at a such a young age, she sees Gen Z as more conscious of world events. "They're not just out playing hopscotch," she says.

She also thinks this generation will take characteristics already affiliated with Gen Y to a new level - be that multitasking or a comfort level with different races, ethnicities and cultures.

Seven-year-old Ryan Cook's parents have noticed many of these traits in him.

Asked what a recession is, he's able to tell you that it has to do with the economy and the fact that his parents can't always buy him the things he wants, like video games. "But I think that's fair," he says.

He can tell you that President Barack Obama is the nation's first black president, but - as one whose elementary classroom in suburban Chicago is much more diverse than his parents' - that doesn't seem to phase him much.

"Well, the president is the president," he says nonchalantly. "They don't really change much, except for different speeches."

Like a lot of kids his age, he gets frustrated when he has to sit through TV commercials. He uses his dad's laptop by himself with ease. And though he doesn't have a cell phone, he wants one (partly because his 12-year-old brother has one).

That fits with the notion that, recession or no recession, this generation has a big expectation when it comes to technological gadgets, whether that be cell phones, laptops or the latest version of the iPod or other music players.

And in many instances, their parents are getting them those gadgets, says Nicole Williams, a 39-year-old mom of three who's also a fifth-grade teacher in Seattle.

"They have quick fingers, good muscle strength in those fingers," Williams says, laughing as she refers to the many technological devices her students use in and outside class.

These devices are so coveted - and a sign of status - that theft can be a problem.

That's not surprising to Colin Gounden, a research specialist who thinks access to technology will play a big role in determining which Gen Zers thrive, and which don't.

"There is a segmentation of haves and have-nots that is very global. If you are in Mississippi or Bangalore, if you don't have Internet, your experience is quite parallel," says Gounden, global head of research for Integreon Inc., whose subsidiary Grail Research has compiled a report on Gen Z.

Among other things, he also thinks this generation is more likely to be debt-ridden, partly because getting a college degree will be as important for them as a high school diploma was for their grandparents and great-grandparents.

Gounden is among those who question whether this recession will really impact this generation the way some think it will.

Another skeptic is Jean Twenge, a psychology professor at San Diego State University who's written books and studies that examine entitlement and narcissism in young people.

Twenge cites a recent poll of young people from the 2010 Cassandra Report, compiled by a market research firm known as the Intelligence Group, which found that 81 percent of 7- to 13-year-olds expect they will have their "15 minutes of fame."

"Every arrow points in the direction of continued high expectations and optimism," Twenge says. "Things might be bad sometimes, but they think THEY will make it."