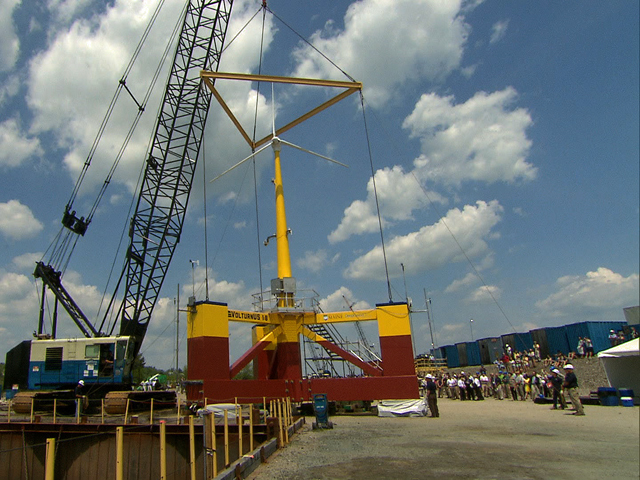 (CBS News) NEW YORK - As we head into another season of air conditioning bills, there's an alternative source of energy picking up speed: harnessing wind power. One pilot program which is off the ground and out to sea.

With a christening on the Penobscot River, VolturnUS was launched -- the nation's first floating turbine intended to make electricity from the ocean's winds.

Habib Dagher developed the technology at the University of Maine. "Within 50 miles of our coast in the U.S., we have the equivalent of enough energy to power the U.S. four times over," he said.

The turbine is just a prototype. The final version would be eight times larger, nearly as tall as the Washington Monument, with each blade longer than the wingspan of a 747.

The plan is to put 150 of them far out at sea, where winds are stronger and more consistent than on land.

"In the Gulf of Maine," said Dagher, "the wind speed about 20 miles offshore is such that we have about 30 percent more energy every year than a turbine close to shores."

In Dagher's lab, students tested models for every possible obstacle, even recreating a miniature "perfect storm," with sustained winds up to 67 miles an hour.

The turbines would be the first in the world made of composite material to avoid rust. They could float on the ocean for up to 100 years.

This new experiment in wind energy has broad support. The National Wildlife Federation calls it a "golden opportunity." And a poll showed 98 percent of Maine residents support the idea.

"This has the potential to revive manufacturing in the state of Maine," said U.S. Senator Susan Collins, "creating new industries, and also potentially the creation of as many as 20,000 new jobs."

The turbine will start to generate power by the end of the week. The hope is to have enough turbines to power the entire state within 10 years.