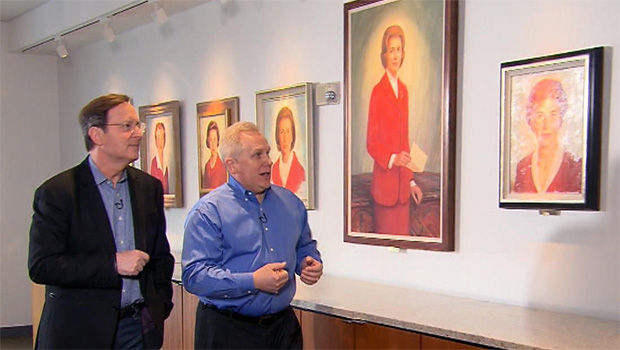 Starting this morning we launch a now-and-again "Sunday Morning" series we call "Minding Our Business" -- a look some of America's great companies. And we begin with The Big G you see on the cereal box. It stands for a company with many another product, and a very rich history. Anthony Mason takes us inside:

Wandering the stacks in the archives of General Mills, which go back to the company's beginning in 1866, you'll encounter the Jolly Green Giant and Betty Crocker, and get just a little taste of American history.

Like the first-ever athlete on a Wheaties box: Lou Gehrig in 1934.

This is the company that gave us Wheaties, and that other, even better-known breakfast cereal.

"But I have to tell you that in 1941 when we created this product, it wasn't actually Cheerios," said in-house historian Tom Forsythe. "The original name of the product is Cheeri-oats."

Forsythe says a competitor sued, claiming trademark infringement. The rest is history. "Often times you think of lawsuits as a negative thing," he said. "This one worked out for us!"

"Today we're the third largest organic food supplier in the country," said Ken Powell, chairman and CEO of General Mills, who says it's all researched in their Betty Crocker Test Kitchens in Minneapolis.

"There are 19 of them, and all of our recipe preparation and development -- it all happens here."

"This company's been around for a century-and-a-half," said Mason. "How do you make sure you're around for another 150 years?"

"By adapting," Powell replied. That, he says, is how the company has survived this long.

"It was a milling company on the banks of the Mississippi," Powell said. "We invented the packaged food revolution in America. The consumer wanted convenience, and General Mills became Betty Crocker and Bisquick and Cheerios and cereal."

He and archivist Jessica Faucher pulled out an early cookbook: "Things you can make with Gold Medal flour‎. They'll expect that you know how to do certain things if you're going to make calves brain, breaded. How to separate the two lobes of the brain with a knife, and then soak them in cold water with a little salt for an hour.

"And they expected you to use everything." Such as? "Ox eyes."

In 1921, the company began marketing its second product, Washburn's Whole Wheat Flakes, which would become Wheaties. But they didn't catch on at first.

"So on Christmas Eve 1926, we hired the Wheaties Quartet to come in and sing the Wheaties jingle, which is the first-ever singing radio commercial," said Forsythe.

"It was catchy, and Wheaties' sales improved," Forsythe said.

The company learned the power of radio and television. General Mills would sponsor "The Lone Ranger" in the 1940s, and the Rocky & Bullwinkle cartoons in the 1950s and '60s.

"When he first came about, they had five bodies and 15 different heads," archivist Jessica Faucher said, so that the animators could produce his frame-by-frame movements.

But no character spans the company's history quite like Betty Cocker, who dates back to 1921. The fictional homemaker's name would decorate millions of cake mix boxes and cookbooks. Mason asked, "Why did General Mills decide they needed a face of Betty Crocker?"

"People believed Betty was real," replied Forsythe, "and so they wanted to see Betty."

In the archives they have the original drawing, done in chalk, which became the basis for Betty's portrait first painted in 1936.

‎Betty Crocker would become the second most recognized person in America, behind Eleanor Roosevelt. She even got mail: 4,000 letters a day.

In 1944, a Florida wife would write Betty about her husband:

As America has changed, Betty has been re-imagined six more times since, most recently in 1996.

"Is it time for a new Betty?" Mason asked.

"Well, there's thought of this. But it's not a small undertaking," Forsythe said. "And this Betty's quite popular. I have to say, I've gotten older, Betty looks the same!"

The challenge now for General Mills will be keeping Betty -- and the company -- ageless for the next 150 years.