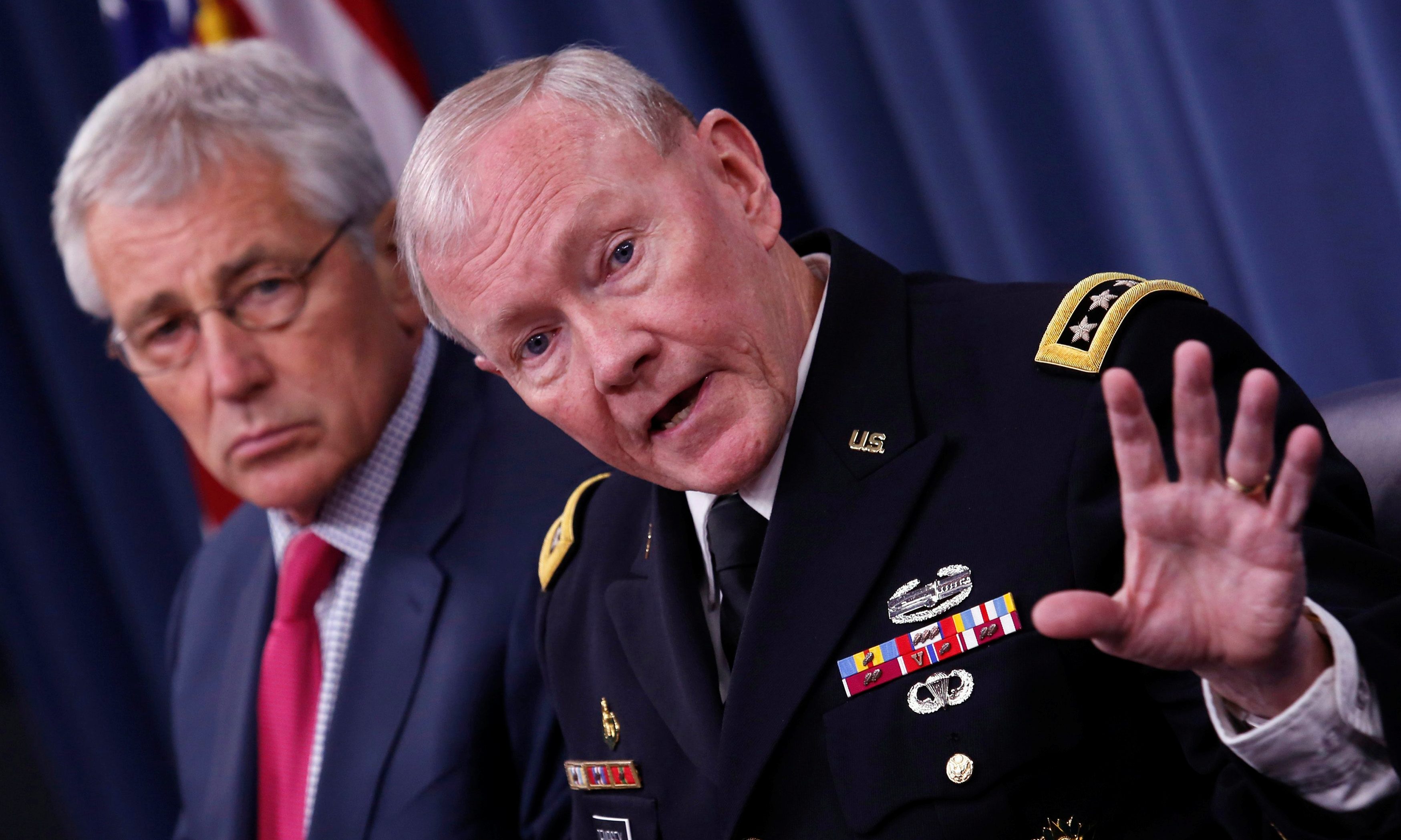 ABOARD A US MILITARY AIRCRAFT - Gen. Martin Dempsey said Sunday that once he determines the Islamic State of Iraq and Syria militants in Iraq have become a direct threat to the U.S. homeland, he will recommend the U.S. military move directly against the group in Syria.

But the chairman of the Joint Chiefs of Staff said that right now, he still believes the insurgent group is still more a regional threat and is not plotting or planning attacks against either the U.S. or Europe.

Speaking on a military plane en route to Afghanistan, Dempsey provided more detail into his thinking about the Islamic militants who have stormed across Iraq, operating out of safe havens in Syria.

So far, the Obama administration has restricted its military action against the militants to specific operations within Iraq, but concerns have increased as the Islamic State of Iraq and Syria (ISIS) extended its reach, taking control of a swath of land stretching from Syria across the border and deep into western and northern Iraq.

The group took over Iraq's second largest city, Mosul, in June, and has since declared an Islamic state, or caliphate, in territory under its control in Iraq and Syria.

Dempsey also told reporters traveling with him that he believes that key allies in the region - including Jordan, Turkey and Saudi Arabia - will join the U.S. in quashing ISIS.

"I think ISIS has been so brutal, and has wrapped itself in a radical religious legitimacy that clearly threatens everybody I just mentioned, that I think they will be willing partners," said Dempsey, expressing optimism for the first time that the Arab nations would join in the conflict.

He contrasted ISIS to the Yemen-based al Qaeda in the Arabian Peninsula, which has plotted and attempted attacks against the U.S. and Europe. As a result, the U.S. has conducted counterterrorism strikes against the group within Yemen.

Dempsey said that so far, there is no sign that ISIS militants are engaged in "active plotting against the homeland, so it's different than that which we see in Yemen."

"I can tell you with great clarity and certainty that if that threat existed inside of Syria that it would certainly be my strong recommendation that we would deal with it," said Dempsey. "I have every confidence that the president of the United States would deal with it."

He added that those regional partners could come together and squeeze the Islamic State group "from multiple directions in order to initially disrupt and eventually defeat them. It has to happen with them, much less with us."

Up to now, when asked about airstrikes inside Syria, Dempsey and Defense Secretary Chuck Hagel have said all options remain on the table. But so far there has been no broader authorization for such operations.

The Obama administration has authorized airstrikes within Iraq to protect U.S. personnel and facilities and to help Iraqi and Kurdish forces assist refugees driven from their homes by ISIS. Most of the recent strikes have been around the Mosul Dam, which Islamic militants had taken, but it is now back in the hands of the Iraqi and Kurdish troops.

Senior U.S. leaders, from the White House to the Pentagon, have said the key to success in Iraq is the formation of an inclusive government that will include disenfranchised Sunnis.

As ISIS militants moved across Iraq, some Sunnis - including some members of the Iraqi security forces - either threw down their weapons or joined the group.

The U.S. has been encouraged as new Iraqi leaders, including Shiite prime minister-designate Haider al-Abadi, begin to take steps to form a new government and reach out to Sunnis.

Officials have suggested that any additional military assistance from the U.S. to Iraq is contingent on those political and diplomatic steps by the government.

One possibility, said Dempsey, would be to have U.S. forces provide more expanded advice and assistance to the Iraqi force.

He said military assessment teams looked at about 50 Iraqi brigades and a number of the Kurdish units and have a good idea which ones have appropriate training and equipment and have not been infiltrated by militia.

So far, Dempsey said the U.S. has not sought or received permission to put advisers into Iraqi brigades or headquarters units and accompany them into combat.

To date, U.S. forces have conducted a total of 96 airstrikes across Iraq. Of those, 62 have been around the Mosul Dam.

The strikes have helps to break the insurgents' momentum, said Dempsey, and strip away some of the mythology that ISIS is impregnable or overwhelming.

Dempsey is on his way to Afghanistan to attend a change of command ceremony Tuesday. Marine Gen. Joseph Dunford is stepping down as the top commander there; Army Gen. John Campbell will take over.