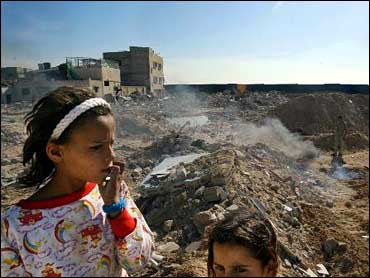 Despite U.S. criticism, Israel plans to demolish hundreds more homes in a Palestinian refugee camp if violence and weapons smuggling persist there, officials said Sunday, after one of the bloodiest weeks in the current round of fighting.

Israeli also plans to make wider use of air strikes in Gaza, the Israeli defense minister was quoted as telling the Israeli Cabinet. Missile strikes tend to be more lethal than other means of fighting.

Early Monday, Israeli helicopters fired five missiles into an office run by Yasser Arafat's Fatah movement in Gaza City, witnesses said. No one was hurt in the attack, which came just after midnight local time. The Israeli military had no immediate comment.

Also Sunday, Israeli troops clashed with armed Palestinians south of the West Bank city of Hebron, the military said. One of the Palestinian was hit.

The Israeli warnings over Gaza came after 13 Israeli soldiers were killed in the there last week. The high death toll has galvanized a popular campaign for a withdrawal from Gaza, with more than 100,000 Israelis rallying in Tel Aviv over the weekend — one of the largest demonstrations here in recent years.

Prime Minister Ariel Sharon wants to withdraw from Gaza, but his plan of "unilateral disengagement" has been vetoed by his Likud Party, and the military instead is intensifying its strikes against armed Palestinians.

In recent days, the main area of friction has been the Rafah refugee camp on Gaza-Egypt border, where seven Israeli soldiers were killed last week — five in an explosion on a border patrol road and two by sniper fire in the camp.

In response, army bulldozers demolished 88 houses in Rafah on Friday, according to the U.N. Relief and Works Agency, which aids refugees. The demolitions left about 1,000 Palestinians homeless, UNRWA said.

House demolitions have been condemned by international human rights groups as collective punishment, and on Sunday, the practice drew rare U.S. criticism of Israeli policy.

"We don't think that is productive," U.S. Secretary of State Colin Powell said while attending the World Economic Forum in Jordan. "We know Israel has a right for self-defense, but the kind of actions that they're taking in Rafah with the destruction of Palestinian homes, we oppose."

At the weekly meeting of the Israeli Cabinet, the army chief, Lt. Gen. Moshe Yaalon told ministers the army has marked hundreds of homes along the border for demolition if violence continues, participants said.

The homes would be razed in order to widen the Israeli patrol road between the camp and the border with Egypt. The road is six miles long and initially was 25 yards wide.

Since the outbreak of fighting, Israeli troops have razed hundred of Rafah homes abutting the road, and widened the buffer zone, in some area to about 200 meters. A senior Israeli army officer, speaking on condition of anonymity, said the military wants to widen the entire zone to up to 250 meters — which could require many more houses to be torn down.

Israel TV's Channel Two said the army is also considering digging a huge trench between the camp and the patrol road, to prevent the Palestinians from digging tunnels through which weapons are smuggled from Egypt to Gaza.

Israeli forces often enter the camp in search of tunnels, and Palestinian militants confront them with guns and bombs, making the squalid camp, home to 90,000 refugees, a constant flashpoint.

Israel's Supreme Court on Sunday cleared the way for more demolitions, rejecting a petition to prevent the razing of 13 houses in Rafah. The three judges said the army had a "real, imminent need" that justified the demolitions.

Raji Sourani, director of the Palestinian Center for Human Rights, said house demolitions violate the Geneva Conventions and appealed to nations that signed them to intervene.

Peter Hansen, the UNRWA chief, said he was "extremely alarmed" by Israel's plans to take down more homes.

At the Cabinet meeting, Defense Minister Shaul Mofaz said he would step up military activity, according to officials briefing reporters. During fighting that followed the attacks on the soldiers, 32 Palestinians were killed.

Mofaz noted that Israel had carried out a number of air strikes on militant targets in recent days. "We started continuous air strikes. We will deepen the fighting," Mofaz said, according to the officials.

The air strikes targeted a Hamas office and the office of a group affiliated with Yasser Arafat's Fatah faction. Power was restored hours later.

In another development Sunday, the mufti of Jerusalem, Ikrima Sabri, was taken into police custody for questioning and was to be released later in the day, police said.

Sabri has been taken for questioning several times in the past for allegedly inflammatory sermons at the Al Aqsa Mosque.