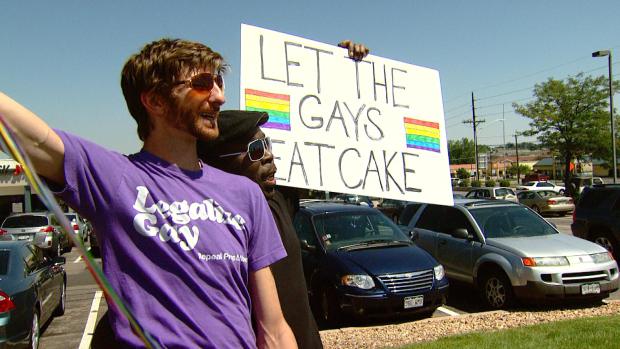 DENVER -- A suburban Denver baker who refused to make a wedding cake for a gay couple will argue Tuesday before the Colorado Court of Appeals that his religious beliefs should protect him from sanctions against his business.

The case underscores how the already simmering tension between religious-freedom advocates and gay-rights supporters is likely to become more heated in the aftermath of the U.S. Supreme Court's landmark ruling last month legalizing same-sex marriage nationwide.

"What the relationship is between that reality and sort of what that will mean for things like service provisions is where I think the battles will really be fought now," said Melissa Hart, a law professor at the University of Colorado.

The 2012 Colorado case has ignited a passionate debate over whether individuals can cite their beliefs as a basis for declining to participate in a same-sex wedding ceremony or if such refusals on religious grounds can lead to discrimination allegations.

At the center of the case are baker Jack Phillips, owner of Lakewood's Masterpiece Cakeshop, and Charlie Craig and David Mullins, who were married in Massachusetts and wanted a wedding cake to celebrate in Colorado. That Phillips refused to make a cake for them is not in dispute, but his reasons for doing so are.

Phillips argues he has no problem serving gay people at his store, but he says that making a wedding cake for a same-sex wedding would violate his Christian beliefs.

"We would close down the bakery before we would complicate our beliefs," Phillips said last year, according to CBS Denver. Phillips also admitted he had refused service to other same-sex couples.

Craig and Mullins filed a complaint with Colorado's Civil Rights Commission, which handles cases involving allegations of discrimination under the state's public accommodation law. In December 2013, a judge for the commission ruled that Phillips discriminated against the couple and ordered him to change his store policy against making cakes for gay weddings or face fines.

Phillips appealed the ruling and the Colorado Court of Appeals will hear arguments Tuesday morning.

"If there are more and more cases like this one, which I think is likely, the national conversation will move from marriage equality to the rights of other people in relationship to that marriage - the right to Mr. Phillip's religious rights," Hart said.

Even before the U.S. Supreme Court ruling on gay marriage, the conflict between religion and same-sex rights was apparent.

In Washington state, a florist has been fighting a lawsuit against her for refusing to provide services for a gay wedding in 2013. And two years ago, the New Mexico Supreme Court ruled that a photographer who wouldn't take pictures of a gay couple's 2006 commitment ceremony violated the state's discrimination law.

Last week, the Bureau of Labor and Industries ruled that owners of a Portland-area bakery that declined to make a wedding cake for a gay couple two years ago must pay $135,000 in damages for the emotional suffering caused to Laurel and Rachel Bowman-Cryer.

Both sides of the debate over gay rights and religious freedom remain far apart.

"It's not the government's job to force him (Jack Phillips) to violate his conscience and every citizen should be frightened that special interests want to take away your right to your religious beliefs. We should all say no to that," said Rep. Gordon Klingenschmitt, a Republican from Colorado Springs.

On the other side, Laura Reinsch, a spokeswoman for the gay rights group One Colorado, warned that a ruling favoring Phillips would mean "Coloradans would be encouraged to pick and choose which laws they want to follow, and taxpayers would have to foot the bill for endless lawsuits to sort out the problems it could create."