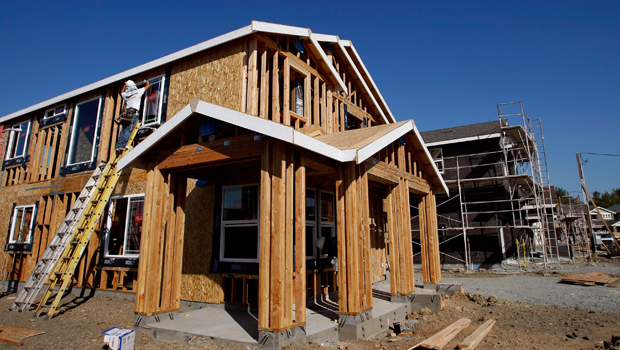 WASHINGTON A measure of the U.S. economy's future health rose solidly in April, buoyed by a sharp rise in applications to build homes and a better job market.

The Conference Board said Friday that its index of leading indicators increased 0.6 percent last month to a reading of 95. That followed a 0.2 percent decline in March.

The index is intended to signal economic conditions three to six months out.

Conference Board economist Ken Goldstein said the index is 3.5 percent higher at an annual rate than it was six months ago, suggesting expansion for the economy.

The index is composed of 10 forward-pointing indicators. Strength in April came from the surge in building permits, a drop in applications for unemployment benefits and a rising stock market.

Holding the index back in April: weaker consumer confidence and a decline in the average hours worked at U.S. factories.

A separate report Friday showed consumer confidence jumped to a near-six-year high in early May. The University of Michigan's consumer sentiment index rose to 83.7, up from 76.4 in April.

"Changes in confidence don't always filter through into changes in spending, but the omens are good,'' said Amna Asaf, an economist at Capital Economics.

The job market has also improved over the past six months. The economy has added an average of 208,000 jobs a month since November. That's up from only 138,000 a month in the previous six months.

Unemployment has fallen to a four-year low of 7.5 percent.

A rebound in housing, along with a limited supply of homes for sale, has lifted the construction industry.

Construction cooled off in April as builders broke ground on fewer homes after topping the 1 million mark in March for the first time since 2008. But most of the decline was in apartment construction, which tends to vary sharply from month to month.

The most encouraging sign for the industry last month was that applications for new construction reached a five-year peak. That suggests the housing revival will be sustained.

Builders are benefiting from a sustained rebound in housing that began a year ago. Steady job growth, rock-bottom mortgage rates and rising home values have boosted demand.

The overall economy grew at an annual rate of 2.5 percent in the January-March quarter, up from a rate of just 0.4 percent in the October-December quarter. The fastest expansion in consumer spending in more than two years drove economic growth in the first quarter.