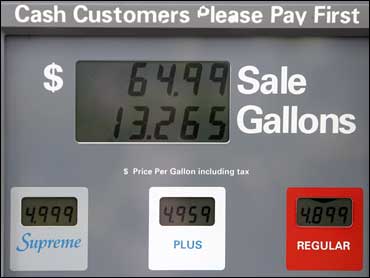 There is good news at the gas pump, as Americans get ready to fill their cars, RVs and boats for the Labor Day weekend.

The national average price for gasoline has been falling steadily this month, reaching about $2.68 for a gallon of unleaded on Monday, according to AAA, Wright Express and Oil Price Information Service. That's about 6 cents a gallon less than a month ago and 7 cents less than it was on the Friday before the July Fourth weekend.

In its weekly report on gas pump prices released Monday, the Energy Department's Energy Information Administration said the national average for a gallon of unleaded was $2.68, down about 2 cents from a week ago. California drivers paid the most, at $3.09 a gallon. The lowest average price was about $2.53 a gallon in Gulf Coast states.

A plunge in wholesale gasoline prices earlier this month is pushing down prices at the pump, PFGBest analyst Phil Flynn said.

The price drop comes as the summer driving season winds down, and gasoline supplies remain nearly 12 percent above the five-year average with overall demand below pre-recession levels.

Most analysts believe retail prices will continue to fall into Labor Day weekend and continue to retreat in September, when the roads will be left mainly to commercial vehicles and commuters.

"After the Labor Day weekend, the summer driving season is basically over. We're going into the weakest demand period of the year," Flynn said.

In other energy trading, oil prices fell after the Commerce Department said consumer spending rose just 0.4 percent in July. That included a 2.6 percent increase in spending on gasoline and other energy products, like electricity.

However, there are concerns that consumers will buy less gas and oil in the second half of the yearn with unemployment high and the economic recovery wobbly.

Benchmark crude for October delivery lost 47 cents to settle at $74.70 a barrel on the New York Mercantile Exchange.

In London, Brent crude fell 5 cents to settle at $76.60 a barrel on the ICE futures exchange.