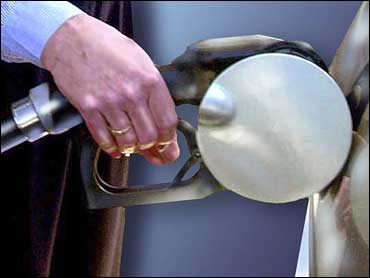 CBS News Correspondent Trish Regan reports that it's not just the giant retailers feeling the effects of higher energy costs. Florist Richard Sonnick is a one-man operation trying to cope with fuel surcharges tacked on by wholesalers.

"There's really nothing I can do. I have to eat it, to be honest with you. I hate to say it like that, but that's what I've been doing, I've been paying the extra," Sonnick said.

Regan reports that higher gas prices could soon translate into higher prices for the goods we buy and slow sales across the board.

"We are starting to see the bite from some of the risks that have been lurking in the background, like oil," said Hans Olsen, managing director and chief investment officer at Bingham Legg Advisers. "I think it's going to continue to be tougher for this market to do anything positive."

Investors also fretted over the latest reading of the Labor Department's Consumer Price Index, which rose 0.5 percent in July — the biggest increase in three months and larger than the 0.4 percent hike economists had expected. With food and energy prices removed, "core" CPI rose 0.1 percent.

Bonds rose sharply as stocks moved lower, with the yield on the 10-year Treasury note falling to 4.21 percent from 4.28 percent late Monday. The dollar was up against the euro and gold prices fell.

Crude oil futures traded in a narrow range but remained in the mid-$60 range — high enough to keep gasoline and heating oil prices near record levels. A barrel of light crude was quoted at $66.08, down 19 cents, on the New York Mercantile Exchange.

In one of the few bright spots of the session, investors welcomed the Commerce Department's report on home construction. For July, the number of housing projects started fell slightly to an annualized 2.042 million units, but housing permits issued reached a 21-year high.

Yet the retail sector sputtered.

Investors focused on Wal-Mart and its warnings of future troubles. While the Dow component's earnings beat Wall Street's profit forecasts by 2 cents per share, the company's profit gain was its smallest in four years and its revenues missed estimates. The company warned that its third-quarter earnings would be lower than expected, again blaming high gas prices for eating into shopper's spending. Wal-Mart fell $1.53 to $47.57.

Fellow Dow industrial Home Depot Inc. fell 94 cents to $40.67 despite reporting a 14 percent jump in quarterly profits that beat Wall Street's expectations by 3 cents per share on strong revenues. The company, apparently avoiding the energy pinch felt by Wal-Mart and other retailers, also increased its profit forecasts for the rest of the year.

Teen retailer Abercrombie & Fitch Co. closed regular trading down $2.32 to $61.23. Its earnings, released after the close of regular trading, missed analysts' estimates and the stock lost $4.48 to $56.75 in extended trading.

Ed Peters, chief investment officer at PanAgora Asset Management Inc. called the news from retailers "potentially troublesome." Other retail and consumer stocks dropped, including Target, which fell $1.44 to $55.71, Limited, which fell 84 cents to $23.35 and Starbucks Corp., which fell $1.15 to $51.09.

Computer maker Gateway Inc., which reported after the close of regular trading Monday, posted a quarterly profit for the first time in three years, but cut its profit and sales forecasts for the rest of the year. That led analysts at Bear Stearns to cut their rating on the company to "underperform" from "peer perform." Gateway tumbled fell 78 cents, or 20 percent, to $3.11.

Declining issues outnumbered advancers by more than 2 to 1 on the New York Stock Exchange, where volume came to 1.38 billion shares, down from 1.18 billion Monday.