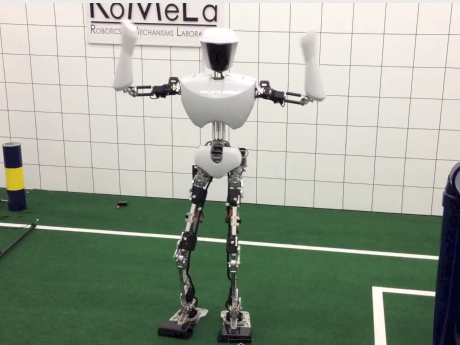 (CBS News) We've got two "Gangnam Style" surprises for you this weekend in the form of a dancing robot and the Merchant Marines joining in on the musical military stand-off. We kick things off with the fascinating, bizarre, cool and everything in-between video above.  Check it out.

The technology demonstration meets K-Pop music culture and dance video was posted by The Robotics & Mechanisms Laboratory (RoMeLa) at Virginia Tech who write about it:

The CHARLI series humanoid robot is developed as a research platform to study bipedal walking and autonomous behaviors for humanoid robots. It is designed to be ultra light weight (under 15 kgs) for safety and low cost. As the next generation of the CHARLI series humanoid robots, CHARLI-2 improves stability and speed in walking, intelligence and autonomy, and soccer playing skills. CHARLI-L2 is also designed to participate in the autonomous robot soccer competition, RoboCup, in the Adult size league. CHARLI-2 implements an impressive active stabilization strategy based on sensory feedback (filtered IMU angles, gyro rate readings and proprioception information based on joint encoders.) Stabilizing torques at the ankle joints are applied based on this information, and successful ly rejects external disturbances. CHARLI-2 is honored "2011 Best Invention of the Year" by Time magazine, won the Louis Vuitton Best Humanoid Award (a.k.a. Louis Vuitton Cup) at RoboCup 2011, and won First Place in AdultSize league for autonomous soccer at both RoboCup 2011 and RoboCup 2012 among many awards.

Thanks to Commenter mfinlayson27 for alerting us to this latest entry into the military music fray!