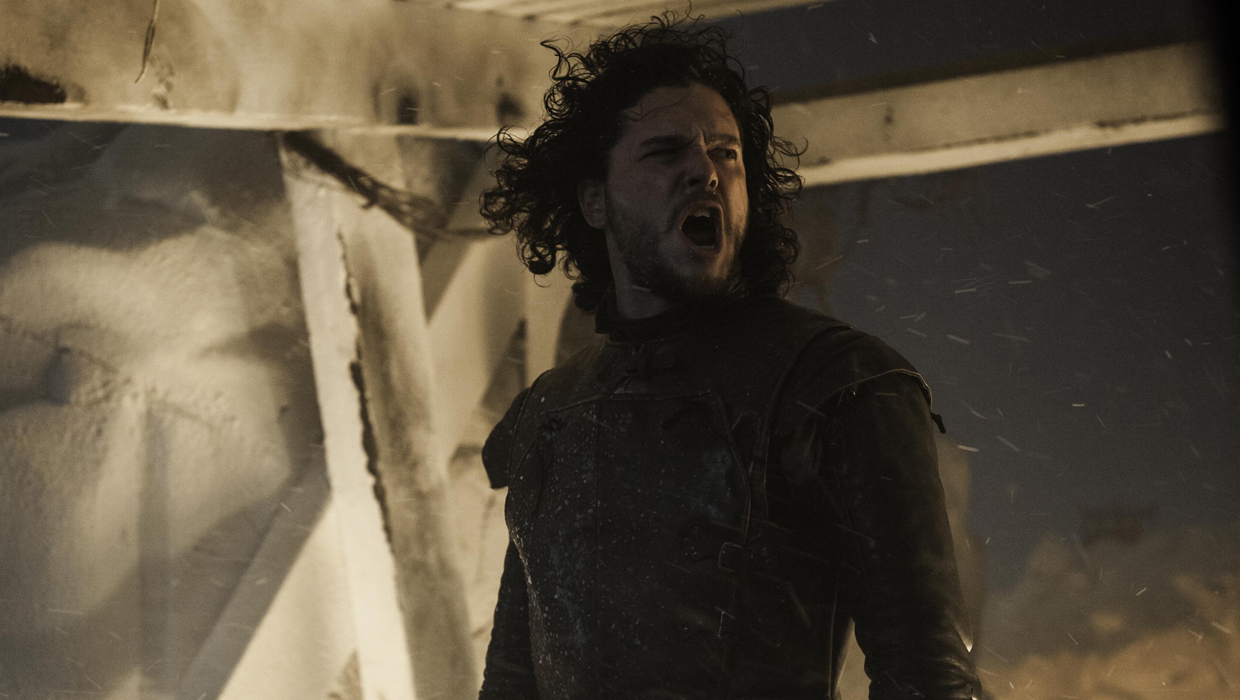 [Warning: This post contains spoilers for this week's "Game of Thrones" episode, "The Watchers on the Wall."]

What does it say about "Game of Thrones" that I spent much of Sunday's episode, "The Watchers on the Wall," bracing myself for the death of Jon Snow? I haven't read George R.R. Martin's "Song of Ice and Fire" books, but this was the show that made us root for Ned Stark and then beheaded him, made us cheer Robb Stark and then killed him and, just last week, crushed us again like The Mountain did to Prince Oberyn's poor head -- so, with this much-buzzed-about epic battle at the Wall now upon us, you can't blame me for expecting the worst for another one of the good guys.

Thankfully, I was wrong -- Snow survived (at least, for now). But others weren't so lucky.

"Thrones" kept all the action this week up at Castle Black for the big fight. And it was big -- giants, mastodons and the kind of CGI you normally only see at the movies. But first, we see Sam asking Jon about sex. He wants to know what it's like to be with a woman, and what it's like to love someone and be loved back. (He's also given some thoughts to the Night's Watch vows and thinks they only prohibit marriage and children, but not sex per se. Loopholes!) Jon tries to explain but ends up with, "I don't know -- I'm not a bleeding poet." Then, thinking back on the last time he saw Ygritte, adds, "What did I get for it? An arrow 6 inches from my heart."

Not too long after, Gilly and her baby show up at the gate. Sam hides them away and vows to keep her safe, but goes back to help defend the Wall despite her objections. Then, they kiss.

Not too far away, Ygirtte is readying a slew of arrows to kill Crows, but there's one in particular she's got her eye on. "Jon Snow is mine. Anyone else tries to kill him and I'll have an arrow for them," she says.

Mance Rayder lights his massive fire -- the sign for his forces to begin their attack -- and the fight is on. Ser Alliser Thorne admits to Jon that he was wrong not to believe him about sealing off the tunnel. But then he gives his men a rousing speech to steel them for battle.

Wildlings come at the castle from one direction, giants and mammoths from another. The action is immediate, continuous and intense -- flaming arrows flying, Thenns and free folk causing carnage, invaders scaling the Wall (until a giant scythe knocks them down in a bloody swoop) and Grenn and a group of Night's Watchmen reciting their vows as invaders charge them at the inner gate inside the tunnel. Jon, de facto in charge after Alliser gets wounded, joins the fray along with his direwolf, Ghost.

Ygritte shoots Pip with an arrow through the throat right in front of Sam, and he tells his poor friend he's going to be all right even though he's clearly not. Grenn & co. hold the tunnel, but lose their lives in the process.

And when Ygritte finally comes face to face with Jon and gets the opportunity to kill him, she hesitates. As they're standing there, Ollie (the young boy whose father was killed by Ygritte earlier this season) shoots her down. Jon holds her, and they share an emotional moment as the battle wages on around them.

"We should have stayed in that cave," she tells him. "We'll go back there," he responds.

Her final words? "You know nothing, Jon Snow."

It's all enough to successfully defend the Wall for one night, and Tormund Giantsbane is taken prisoner. But, Jon points out, there's still a massive army out there that will attack again. He decides he's going to go out and try to assassinate Mance Rayder, hoping that without the leader uniting them the tribes of free folk will go back to fighting each other instead of attacking the Wall. Sam objects, but Jon shoots him down.

So the episode ends with Jon, heartbroken but determined, stepping out beyond the gates to carry out his mission.

Tell us: What did you think of "The Watchers on the Wall"? Was the battle big enough to rival Blackwater? And were you sad to see Ygritte go?