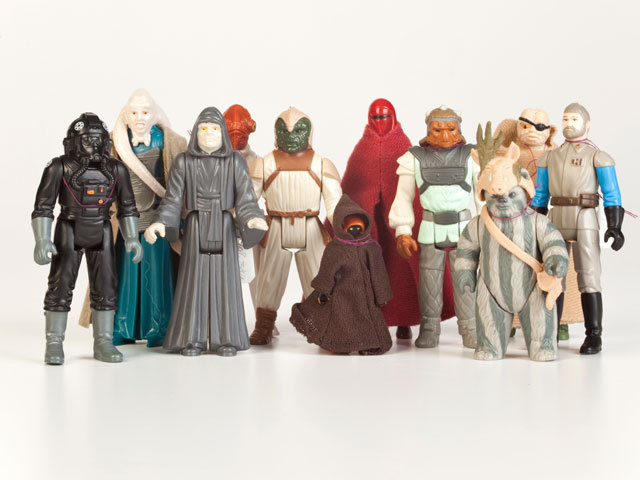 With just a few days until the premiere of the first Star Wars movie in more than a decade, the Force is strong with serious collectors of Luke Skywalker action figures, Darth Vader lunch boxes and scads of other collectibles inspired by the newly reinvigorated sci-fi franchise.

Some Star Wars toys that originally sold for less than $10 in the 1970s and 1980s now go for more than $10,000, if you can find them in the original, unopened packaging, especially if the little hole for hanging them on a hook in the store was never punched out. And prices in the $3,000 to 5,000 range are not uncommon.

For one thing, kids who started collecting when the first Star Wars movie came out in 1977 are now well-heeled lawyers and executives with serious money to spend on their obsession.

While experts say prices dipped some after the last of the second Star Wars trilogy came out, the market has exploded as anticipation builds for the pre-Christmas opening of Star Wars: The Force Awakens.

"Prices were never what they are now," says D. Martin Myatt, content manager for rebelscum.com, which claims to be the world's largest website for Star Wars collectors. "Now, it's shocking. Things that used to sell for $100 are now selling for $1,000. You will see prices on eBay go for two or three times more than people were expecting."

The notion that a new Star Wars movie is whetting collectors' appetites will be put to the test December 11 when Sotheby's holds its first-ever auction of Star Wars toys and memorabilia just a week before the film opens in the U.S.

About 600 items, ranging from rare action figures to replica lightsabers and Darth Vader helmets, could bring in upwards of $1 million for the seller, Japanese fashion designer Tomoaki Nagao, who is known professionally as Nigo. The 42-year-old creator of ultra-hip, ultra-expensive clothes and shoes for skateboarders and other street kids, who sold 90 percent of his business two years ago to avoid putting it into bankruptcy, has been collecting Star Wars stuff since he was six.

"I would imagine some of these items could do very well, considering the recent market and right before the movie coming out," says Travis Stein, purchasing manager for Brian's Toys, a dealer in Fountain City, Wisconsin, which specializes in Star Wars merchandise. "What I like to see is that he has a lot of Boba Fett," a minor bounty hunter character who first appeared in the second Star Wars movie, The Empire Strikes Back.

Boba Fett's lack of screen time may explain why fans have a cultish devotion to collecting his action figure. "If there's one item we could find a buyer for quickly it's a Boba Fett," adds Mr. Stein. "That's just huge overall."

In October 2014, Nigo sold a set of 16 Star Wars action figures as part of a much larger auction of other things he had collected at a Sotheby's auction in Hong Kong.

It sold for about $72,525 at today's exchange rates, more than three times the highest estimated selling price.

"Today, if I had that set in my hands, I could get considerably more, probably over $100,000" says James Gallo, owner of Toy and Comics Heaven, a dealership near Philadelphia. He is one of two outside consultants on Sotheby's upcoming Star Wars auction, but not the one in Hong Kong last year.

The auction's "timing is fantastic," says Jordan Hembrough, owner of Hollywood Heroes Entertainment, a toy dealer and consultant who also is working with Sotheby's. "There couldn't be a better time."

"Everybody's eyes are on it," agrees rebelscum.com's Myatt. "They're just going to make a fortune on those auctions. I have no doubt of it."

But if the movie bombs? "I think you'll see a correction," says Gallo. "A lot of people are buying to sell or holding to see what becomes of the movie. You will see increased availability of a lot of stuff and generally, when there's more supply there's some kind of price correction. I do not think the growth rate is sustainable or maintainable."

Years from now, collectors may look back and say that prices peaked "a long time ago, in a galaxy far, far away."

Then again, one of Nigo's rarest Luke Skywalker figurines--the one with the double-telescoping lightsaber--could go for $12,000 to $18,000 at the Dec. 11 auction, Sotheby's estimates.

If you bought a Star Wars action figure for $2.49 in 1978 and kept the packaging intact, you might easily sell it for $3,200 today. That's better than the 127,928% return on a share of Berkshire Hathaway stock since that year.

Warren Buffett is a smart fella, but, clearly, he's no Yoda.