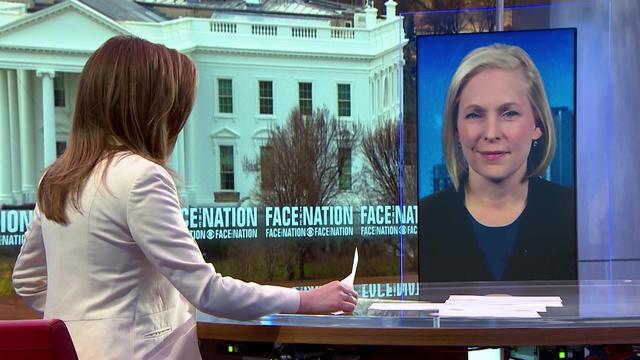 Read more interviews of 2020 candidates on "Face the Nation" here.

MARGARET BRENNAN: Welcome back to Face the Nation. We now go to Senator Kirsten Gillibrand. She's a Democrat from New York. And the newest contender in the 2020 Democratic presidential primary. She joins us this morning from Des Moines. Senator welcome to Face the Nation.

MARGARET BRENNAN: You have said that you are a no on the president's proposal here to end the shutdown. Why isn't the offer of three years of protection for DAC-DACA on TPS recipients enough of a start for you?

SEN. GILLIBRAND: Well, he's the one who got rid of DACA protection in the first place, and to offer a temporary- temporary respite, it doesn't- If you talk to any DACA recipient in America today, they- they're anxious. They're worried. They're concerned, they might be at school. They don't know if they can finish school. They might be getting married. Their lives are being upended and this president has no compassion. So I don't think you should even consider this because it's three years is just DACA. Why not all the Dreamers? Why not a permanent pathway to citizenship so they actually can have certainty about their lives. What it really shows this is lack of compassion and empathy for people that are suffering. And I think it's a nonstarter.

MARGARET BRENNAN: The president said this morning in a tweet that amnesty could be part of a broader deal down the line. Do you take him at his word on that?

SEN. GILLIBRAND: No I don't. I don't take him on his word on anything. If he really cares about this, he would open up the government, stop the eight hundred thousand people that didn't get a paycheck last week, stop their suffering. Some people can't pay for medicines, food, heat, mortgages, rents. It's-It just shows a callousness that is unacceptable. And so open the government, pay the people pay our public servants, and then get to the business of talking about a comprehensive immigration reform. But to- to-start just- to offer him a three year DACA deal is just not- It doesn't accomplish what we need to accomplish. It's not enough. And I think it's cynical.

MARGARET BRENNAN: Well Democrats would have to agree to anything the president really puts forward in order to-to end the shutdown. But when I look at some of your past comments, you've said the president is ripping apart the moral fabric of our country. You have a consistent voting record of-of voting against us, many of his nominees. Do you think there's the possibility for any kind of proposal you could sign onto in the middle of this election campaign?

SEN. GILLIBRAND: Well what I wish he would do is just open up the government under the agreement that we will make a deal with him and have time to actually meet it out. We do want as a starting measure to protect all dreamers. And so I can imagine that Democrats can talk to him about making sure that we protect all Dreamers. Democrats aren't afraid to protect this country. We will invest in border security. We will invest in anti-terrorism--

MARGARET BRENNAN: And that means money order a border barrier?

SEN. GILLIBRAND: I don't think that's the most effective way to do it. I think there is common ground here. If you focus on his goal- if he wants to keep terrorists out of this country if he wants to make sure there's no human trafficking and no drug trafficking and no gun trafficking, those are areas that we can work on. We will give him money for border security. If he just wants to throw it down the drain an ineffective barrier, it's just unwise. And so come to the table talk to us about the shared values of keeping America safe but care about the Dreamers, care about the kids who've been here a long time and who are adding to our communities. Immigration is our strength. Our diversity is a strength. We have always been a nation of immigrants. And for this president to sow so much fear about refugees, people who are seeking asylum, is just contrary to back to what you said the moral fabric of this country. We've always cared about others and that's what the Statue of Liberty stands for.

MARGARET BRENNAN: An RNC spokesperson issued a statement after you declared your candidacy saying, 'If you looked up political opportunism in the dictionary, Kirsten Gillibrand photo would be next to it from jumping on the abolish ICE bandwagon to turning on the Clintons. She always goes where the political wind blows.' How do you respond to that?

MARGARET BRENNAN: But some of your agenda has, which is what they're attacking there.

SEN. GILLIBRAND: Ten years ago when I became senator of New York state, a state of 20 million people, I recognized that my focus on the concerns of my upstate district were not enough. I needed to focus on the concerns of the whole state, and so on immigration I spent time at immigration- immigrant communities. A Nydia Velazquez took me to her district in Brooklyn, and I met with families whose lives were being torn apart because of policies that I did not have enough compassion empathy for. So I recognized I was wrong, and that's why ten years ago I have been fighting for all the families of New York, for every kid in this in our state who needed my voice to elevate their pain, suffering and concerns. And so that's what I do. That is why I'm in public service, to help people. And so I would like to be judged on my record and on my heart.

MARGARET BRENNAN: You sit on the Armed Services Committee. If you are Commander in Chief, would you continue the diplomatic talks with North Korea that the president has started?

SEN. GILLIBRAND: So I think it is helpful that President Trump is focused on diplomacy and not bombing North Korea because one of his earlier thought processes were that he needed to have military action, which caused grave concern in my mind and those of many other senators. So I do think diplomacy and engagement is the right approach. Unfortunately President Trump in his first efforts I think it was much more of a political stunt than effective diplomacy and- and political dialogue--

MARGARET BRENNAN: So you don't support this second summit?

MARGARET BRENNAN: You have spoken about your agenda which would include expanding Medicare for all, you had been a co-sponsor on a bill with Bernie Sanders previously that essentially nationalized health care. That would require an estimated one point four trillion dollars a year. How do you finance that

SEN. GILLIBRAND: So I believe that health care should be a right and not a privilege. Because as I've traveled across this country in the last few election cycles campaigning for candidates to flip the House of Representatives and take back some Senate seats, I listen to people. And the biggest worry almost every family in America has is the cost of healthcare and that it will be out of reach for them because the insurance industry doesn't care. So the reason why I believe in Medicare for All is- I think any family should have access to at least one not for profit public option so they can compete with the for profit insurance industry that just has to make their quarterly profits and pay their shareholders value and make sure their CEO is make millions of dollars. That is not aligned with the goal of universal coverage that's good and affordable--

MARGARET BRENNAN: How do you pay for it?

SEN. GILLIBRAND: --If you. So let me explain. If you buy into Medicare in the same way you buy into your Social Security as an earned benefit it is far less expensive for every American than the amount of money they are paying now to the insurance industry. So it will be paid for by each person who wants to invest in their healthcare at a far lower rate they are paying today. And so the bill that Senator Sanders and I and many others introduced, I wrote the part about buying into Medicare because that's what I ran on in 2006 as an upstate New York House candidate in a two to one Republican district. It made sense to my voters then it makes sense to voters across America now. Let them buy in, let them just invest 4 percent of income, which is what our bill says, to get access in the same way they invest 6 percent of their income into Social Security. It's the same earned benefit. If you make it a right in this way. If you create it as a social safety net, people will get higher quality care that is less expensive, and they will always be covered no insurance company can deny them because of preexisting conditions.

MARGARET BRENNAN: Senator we'll be watching your campaign. Thank you very much for joining us.

SEN. GILLIBRAND: Thank you, thank you.

MARGARET BRENNAN: and we'll be right back.

What Joe Biden said in his op-ed on working parents