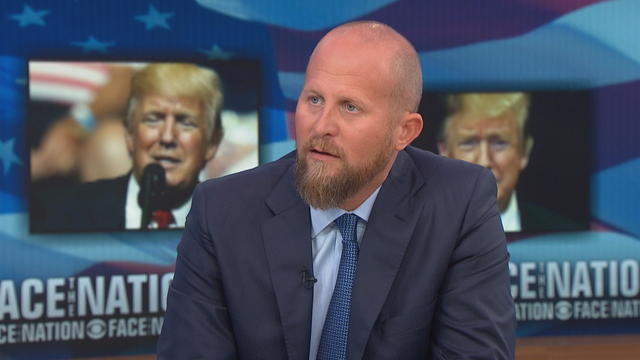 MARGARET BRENNAN: Most of the focus on campaign 2020 so far has been on the very crowded field of Democrats running for the right to face President Trump next fall. We thought we'd take a look at the campaign operation on the Republican side, which kicked off the very day he was inaugurated. Brad Parscale is the president's campaign manager and joins us. Welcome to FACE THE NATION.

BRAD PARSCALE: Thanks for having me. It's my first time here.

MARGARET BRENNAN: You've got kind of an unusual resume. You know- a background in the digital space, in marketing. You had no political experience up until 2016--

PARSCALE: Other being an American.

MARGARET BRENNAN: --but then you became a campaign manager this time around--

MARGARET BRENNAN: --so is this really about marketing? Is that what political campaigns are about these days?

PARSCALE: Running a re-election is a lot about marketing, advertising, understanding data and analytics, building out- you know- foundational structures to understand the president's message and how to deliver it. There's considerable things that- that come from just understanding how to build out the infrastructure to be able to communicate with millions and tens of millions of people and- and how to effectively spend five, six hundred million dollars.

MARGARET BRENNAN: Minimum. I heard you say at one point up to a billion.

PARSCALE: It could but that's- I'm talking about all the infrastructures like the Republican Party's going to spend money, outside groups will spend money. We've already raised over 150 million, I believe, at this point, and we still got a long- 19 months to go.

BRAD PARSCALE: --95 percent of all of our money comes in through small dollars.

PARSCALE: And one nice thing about small dollar donations is it lets people connect and- and- and know they're buying into- into the movement. Our prospecting numbers now are- are numbers people have never seen before. You know I- I hope to have 40, 50 million people direct contacts by Election Day--

MARGARET BRENNAN: What does that mean, direct contacts?

PARSCALE: So every campaign tries to go out and generate data. How- how do I connect to you by cell phone? How do I connect you by email, so that I don't have to run an advertisement and pay CBS to get to you. I can just contact you.

PARSCALE:  --cell phone numbers. We'll have-- right now we're already passing 30 some million, and we're- we're on course by- go to 40, 50 million, which is almost every voter that will vote for us for presidency, I can just call them or email them.

MB: So explain how that fits into the digital strategy.  That means, I'm- I'm sitting in rural Iowa. You want me to vote for President Trump.  Are you targeting me specifically?

PARSCALE: Yeah. So what I do right--

MB: You're changing your message based on where someone is--

PARSCALE: Think about it- I can go across America and say, "hey, here's a voter in Minnesota that if I know if I get, you know, twenty six thousand of these perfect people to show up that didn't show up last time, I can flip that state." So what I do, go find them now. We're spending millions of dollars a month, light years ahead of any can- campaign in history, to build the foundation of who we need to market to, what we need to understand, what we need to say to them and how to exactly deliver to them.

MARGARET BRENNAN: Where? Where are you most focused? What battlegrounds?

PARSCALE: Well, there's some key states. Obviously we have to go back and win Michigan again, Pennsylvania, Wisconsin. We plan on also being in Minnesota very soon. I think New Mexico is in play in 2020. I think New Hampshire, I- I think we continue to grow the map. I think Nevada, you know even Colorado. And so those are- those are states we did not win in- in 2016 that I think are open for 2020.

MARGARET BRENNAN: But the idea in the past, as you brought up TV ads, is the traditional way or has been, or rallies, where you have someone going out and having face to face or door to door contact. Like, how much of the ground game is still part of the strategy for you now?

PARSCALE: Oh it's a huge amount. So, we're still building one of largest ground games in history. So I'll give you some numbers. In 2016, we had seven hundred thousand- about volunteers. We plan on 1.6 million volunteers for 2020 connected- connected--

PARSCALE: Well, all different kinds of things. They will be connected through technology on your phone, through apps and other development and different things. Some people might just hold block parties. Some people might be engaging on social media. Some people might be knocking door to door. In every single metric we're looking at bigger, better and badder than we were in 2016. And we'll- but this time we're not out there trying to prove we can do something, the president's proved he has done it and now we just have to deliver what he's done.

MARGARET BRENNAN: Around the time of the shutdown, the 35 day shutdown we went through, there were fundraising ads going out to supporters saying you know, "send a brick to Nancy."

PARSCALE: Yeah, I loved that idea.

MARGARET BRENNAN: Nancy being Speaker of the House, of course.

MARGARET BRENNAN: And- and this was a way to raise funds. How successful was it- a campaign like that?

PARSCALE: Oh that one was great. That was- you know, a campaign like that could raise three or four million dollars, you know--

PARSCALE: Oh, from small dollar donors. You know they want to--

MARGARET BRENNAN: How does that work?

PARSCALE: Well, they want to be part of an activity. They want- they want to be involved. And this is a way that they got to- to buy a foam brick and- and get it labeled with their name and sent to Nancy Pelosi's office and say you know build the wall. You know its a way it's a way for them somewhere in the middle of Nebraska who's you know so far from the system but wants to be involved. This is a way for them to put twenty five, forty five dollars and say look I want to make a difference. We do that with t-shirts, we do that with hats. We've sold- we're closing in on selling our one millionth red MAGA hat- you know- you know those are 45 bucks a piece. You do the math there really quick, it's 45 million dollars. So those- those kind of things- that this president has- has changed the game in way merchandise, rallies, the entire experience of being part of the political- political movement, he- he's changed it.

MARGARET BRENNAN: But beyond the branding, the value to you campaign-wise is that you retain--

PARSCALE: I retain- I retain information, and we get to keep- we keep the net- net proceeds.

MARGARET BRENNAN: But I'm curious, how does that affect the messaging. I mean if these are people who feel motivated enough or want to be activist enough--

MARGARET BRENNAN: --to give on the particular issue, is the president changing his messaging to match that?

MARGARET BRENNAN: Or is his, you know, agenda, driven by the White House business?

PARSCALE: So what happens is the president sets his policies. These are what they are. Now, those policies are- have a range of things. One person at, you know, 1300 Elm Street could really care about immigration. But at 1305 Elm Street, they could really care about tariff policy. Now that doesn't mean we're changing what the president's message is to them. We are showing them the part of the message that's right for them.

MARGARET BRENNAN: And how much can you actually know about someone based on a text they've sent. I mean, do you know how they voted in the past or--

PARSCALE: So- so the Republican Party built this thing called the Data Trust. One of the largest databases in the world to understand what people are. And can now provide over to me a universe of people attached to the social media and or possibly by text message or different ways and say, "Hey these are the people that are staying in the criteria you're speaking about."

MARGARET BRENNAN: How involved is he in some of these decisions on messaging

PARSCALE: So I always explain it like this. He is the captain of the ship. He is- he is the- he is the engineer of the Trump train. He is the campaign manager, the communications manager, the finance director, coalition's director, all things. My job is to be the Trump conductor. My job is to keep the cars together, keep them running on time get them to the place they need to go. //

MARGARET BRENNAN: You're a disruptor. The president also likes championing that, but you're talking out at people like, Karl Rove, a Bush adviser.

MARGARET BRENNAN: So since- since you've come to Washington so to speak--

MARGARET BRENNAN: --has that changed you?

PARSCALE: Yes, it's changed me. I have a lot less faith in the system. You really don't understand how swampy it is until you get here. I think as a disruptor though yes, in history you know I think that those who don't understand history are due to repeat it in a positive or negative way. And for me not to understand what every predecessor of mine did and what they understood and how they thought regardless of the technology of the time would be doing a disservice to my boss.

MARGARET BRENNAN: So- so do you coordinate with Karl Rove?

PARSCALE: It's not a coordination. It's a learning process. Hey, what did you do? Tell me your stories. What were the worst moments you had? What were the best moments? If you did it over again what do you think you would do? What, how would you handle this situation? You know education, there's not a lot of people running around that have won elections on the Republican side or the Democrat side. I mean the last guy to win a re-election is Karl Rove and Mehlman in 2004 for Republican. And before that it was Reagan that won a re-election. So it's not like, there's a club you can go to and there's just all these reelecting winning campaign managers

MARGARET BRENNAN: So they're telling you how to build out a ground game?

PARSCALE: So no- no- no- now you're saying that. I'm asking them for historical contexts, you know? I think, you know, they don't know what I know and some things I don't know what they know, but they've had to live through it. And- and Karl's given me some great things- afterwards said, "You know what, if I did it again I would have done this, or I wouldn't have done that." And hindsight is a great weapon to have when you're up in front of it again.

MARGARET BRENNAN: So you like the establishment, but sometimes?

PARSCALE: I don't like the establishment. I like the diversity of knowledge, and I'm going to use all that I can to help get President Trump re-elected again in 2020.

MARGARET BRENNAN Brad Pascale, Thank you for joining us.

MARGARET BRENNAN: We'll be back with a lot more FACE THE NATION. Don't go away.