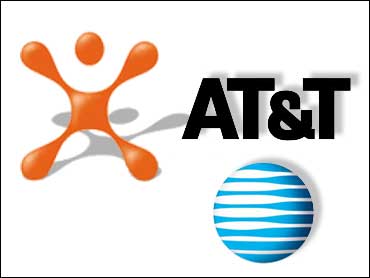 In the latest step of a confusing dance of brand names in the wireless world, AT&T Inc. will next week start its planned rebranding of Cingular, just two weeks after AT&T gained full ownership of the nation's largest wireless carrier through the purchase of BellSouth Corp.

The multimonth awareness campaign will include inserts with monthly bills and promotional materials at Cingular stores advising customers of the coming change.

Cingular's name and orange "Jack" logo, both created only six years ago, will continue to appear alongside the AT&T brand and blue "globe" logo until the company is confident customers won't be confused by the switch, AT&T announced Friday.

But by midyear, it's "likely" the Cingular name and symbol will be disappearing from ads, promotional materials, trucks, bills, stores and buildings, said Wendy Clark, senior vice president of advertising for San Antonio-based AT&T. The only remnant to survive the transition will be the orange, which will be used for accent and background coloring for AT&T's cellular products and services.

"Any time you see us talking about wireless, you'll see us use orange," said Clark.

But as cell phone users tend to buy new handsets only once every couple of years, it's likely that tens of millions of Cingular's roughly 60 million subscribers will be toting around devices with the Cingular name and logo for years to come.

In fact, a dwindling number of Cingular subscribers are still carrying around phones bearing the name and logo AT&T Wireless — artifacts of a tongue-twisting corporate saga.

Instead, Cingular parents SBC and BellSouth decided to unify the companies under the Cingular brand, neither one realizing they'd all soon be merged into one company called AT&T.

Estimates vary widely, but there's no doubt that billions of dollars have been spent creating the Cingular brand from scratch and marketing its products under that name.

Yet while the sudden elimination of the Cingular brand might appear to be a waste of that investment, AT&T expects tremendous savings on the advertising that would have been required to maintain three distinct brands: AT&T, BellSouth and Cingular. (BellSouth's local phone and Internet customers began seeing ads announcing the planned replacement of that brand with AT&T soon after the $86 billion acquisition closed on the next-to-last day of 2006.)

When the AT&T-BellSouth acquisition was announced last March, executives estimated the combined company would save up to a half billion dollars a year on marketing. Overall, those savings are expected to account for a fifth of the estimated $14 billion in operational savings the deal is projected to allow over time.

The decision to rename Cingular as AT&T rather than AT&T Wireless reflects the company's push to sell a wide bundle of services, with a growing level of integration between wired and wireless capabilities that make such distinctions less meaningful. For example, AT&T has said it wants to let customers use their cell phones to check the channel guide and record programs on the new U-verse cable TV service AT&T is launching.

The ad campaign will borrow from Cingular's "Raising The Bar" theme with the phrase "Raising It Higher." Each commercial will end with an animation in which the Jack character appears to skywrite the AT&T globe while an announcer states that "Cingular is now the new AT&T."

Here's how people in 3 different industries use ChatGPT for work
Thanks for reading CBS NEWS.
Create your free account or log in
for more features.
View CBS News In
CBS News App Open
Chrome Safari Continue
Be the first to know
Get browser notifications for breaking news, live events, and exclusive reporting.