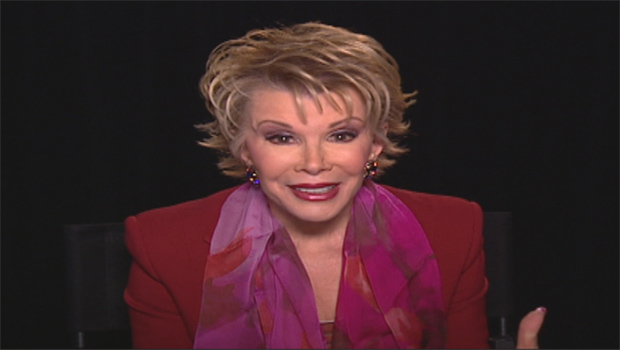 Comedienne Joan Rivers remains in serious condition at New York's Mount Sinai hospital this morning. She went into cardiac arrest Thursday in a Manhattan doctor's office while undergoing a surgical procedure on her throat.

Over the years, Rivers has been a very familiar face -- including here at "Sunday Morning." Back in 2002, we asked her for some thoughts about aging. We figured it was an appropriate time to listen again to what she had to say:

This story was originally broadcast on February 15, 2002.

When "Sunday Morning" called and asked if I thought "older is better," I said, 'Of course," because I thought they were talking about wine or Greek ruins.

And then I read they were talking about people -- old people -- and I thought, "Why ask moi?" [Did I say that all right?]

Anyhow, first of all, I don't think I'm old. Sure, I am probably the only woman in New York who has an autographed copy of the Ten Commandments signed by the author.

But then I decided maybe I am what the French call a woman of a certain age. The term "a woman of a certain age," by the way, means a woman who can make her own way to the intensive care ward of any hospital, or to the Depends counter of any drugstore, and who is still considered arm candy for men like Strom Thurmond and the Pope.

And, then, after sitting around and thinking about it for a while, I realized that being older IS better.

Let me give you some examples. Take your eyesight for example. Even with glasses, as we get older our eyesight gets just so blurred you can't see anything so when you look in the mirror, even on a lousy day, you look great!

And older is better because older people know things that young people don't know, such as how to speak in complete sentences, and who won World War II, and there are questions that cannot be answered by "Hello," and "Whatever," and "Duh."

And most important of all, we know that sex doesn't have to be great as long as the hotel you're having it in is.

Sure, sometimes I say to myself, "Joan, Joan, Joan, come on, you'd like to be younger, wouldn't you?" But overall, I think age is great. First of all, men's snoring no longer bothers me -- I'm hard of hearing.


I no longer have to worry about my panty lines -- my breasts cover them.

And as far as filling my days, you are looking at Miss Popular; I'm not bragging, but do you know I'm invited to at least three, maybe four funerals a day?

And do you know what is the best, best, best, best, best thing about aging? When you're old, everybody thinks you're wise, which is just dandy -- even though the truth is, you're not wise, it's just that people that know how stupid you are, are dead!